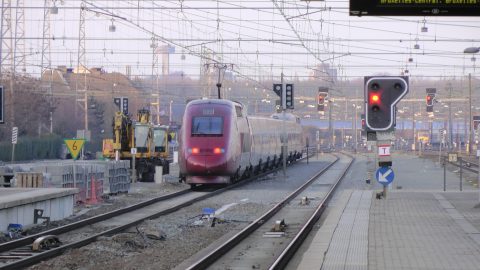 Skimping on infrastructure would be an error of judgement

With the goal of doubling the modal share of rail by 2030, the issue of rail infrastructure has become more critical than ever in many European countries. There are still many who believe that a nice modern train can improve rail service without spending the required money on infrastructure. An error of judgement. Poor track conditions lead to lower speeds and a worse service, regardless of the quality of the rolling stock. Think of it like running a BMW on a cobblestone road.

European transport ministers discussed development of railway transport during an informal meeting in Prague, on October 21 under the Czech presidency of the Council of the European Union (EU). Ministers addressed the inclusion of new links in the TEN-T network and improved rail connectivity.

But the TEN-T network is only a small part of the funding requirements for rail infrastructure. For several years now, this issue has been a regular feature of government discussions, sometimes with some disbelief.

Germany has had an unfortunate episode with the immediate replacement of defective sleepers at around 165 locations on the network. The most affected regions are Bavaria, Saxony, Saxony-Anhalt and Thuringia. It is therefore unrealistic to expect operators to improve punctuality under such conditions.

Of course, Germany’s infrastructure problems are more extensive, with many rusty metal bridges that need to be replaced quickly.

“200 million may seem like a lot but replacing a track switch costs 500,000 euros and we replace 300 of them per year,” said Infrabel CEO Benoît Gilson.

In France, the “performance contract” signed last April showed that SNCF Réseau would not have the money to maintain small lines or to implement the Nexteo signalling system on the Paris RER system for regional trains. With 1 billion euros in financial commitments missing, many small lines could be slowed down or even closed.

The Senate in France sounded the alarm and has held hearings this summer, but this did not change the current situation: public finances are tight.

In Great Britain, it is well known that Network Rail has never been able to deliver on its commitments to improve its network, even though operators rely heavily on such improvements to deliver high-quality services. This is particularly evident in the electrification programme.

Last December, the Treasury blocked Network Rail’s recommendations to accelerate electrification of the country’s railways, set out within the Traction Decarbonisation Network Strategy (TDNS) due to cost concerns. The TDNS recommended electrifying 12,500 kilometres of railway over the next 30 years.

What type of works?

A difficult problem to solve is to distinguish between “refurbishing” and “construction”. The financial flows are indeed different. Some construction activities receive various subsidies, sometimes even from Europe through various mechanisms. Renovations are often booked to the internal budgets of infrastructure managers.

But is building a retaining wall to make the track safer an example of refurbishment or construction? Such questions arise when a bridge that is too old has to be replaced, or when a level crossing has to be replaced by a civil engineering structure. Yet the question also comes up when the track layout needs to be improved to not only increase speed, but safety too.

In any case, it is important to bear in mind that building beautiful trains may appeal to rail users, but that these trains alone will not satisfaction travellers if the financing of rail infrastructures is not met.

Of course, we can understand that there are emergencies everywhere, in health or in energy, which requires all subsidies available. But if the countries wants to achieve their climate objectives, as they claims, they will have to find the funds required to update the infrastructure of an already decarbonised transport: the train.

Ever since speed was raised too 120 mph, track and infrastructure has been due for a decisive upgrading!
(Standards optimal, when steam was shifted out no longer are…)
A New Old Railway is needed.
(Current mantra: predictive, “optimal maintenance” is revealing…An optimal railway is the optimal… and simply requested!)
Redundant, resilent and robust transport devices are the now handsomely rewarded, by willingly paying clients – and vice versa…