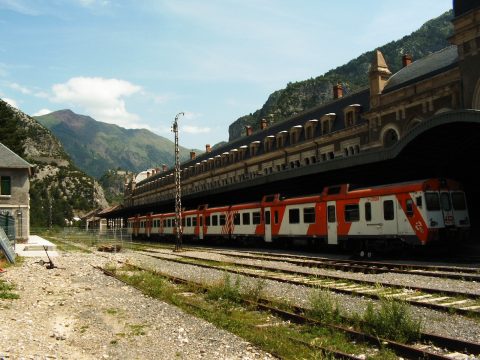 Adif has awarded a contract for the preparations for switching the 138-kilometre long Huesca-Canfranc line in Spain to the standard gauge. It is part of an effort to reopen a cross-border railway across the Pyrenees to France, which has been closed for decades.

Spanish infrastructure manager Adif calls it a ‘decisive step’ towards the creation of a cross-border corridor to France through the Canfranc tunnel. Towards the north, the line between Huesca and Canfranc continues across the French border, a line known as the Pau-Canfranc railway, or Goya Line after the painter Francisco de Goya who was born near Zaragoza and died in Bordeaux.

The Spanish railway network largely consists of tracks with Iberian gauge (1,668 mm), except for the later built high-speed lines. To better connect to the cross-border line, Adif is converting the section to standard European gauge. The action will enable connections to be made across the Pyrenees, boosting rail transport, says Adif. For freight traffic, it will also make it possible to connect important logistic nodes.

The drafting of the project for the section Huesca – Canfranc has been awarded to the Temporary Joint Venture formed by Meta Engineering and Subterra Ingeniería for 847,000 euros. It should be finished within a period of ten months as a preliminary step required to put the eventual construction works out to tender. The action is to be co-financed by the European Union’s Connecting Europe Facility (CEF).

The Pau – Canfranc railway line was closed south of Bedous, France, after a major derailment accident with a freight train in March 1970 destroyed the L’Estanguet bridge south of Accous. This forced the suspension of traffic on the French side, also stopping international traffic on the 310-kilometre Zaragoza – Canfranc-Pau line.

A financing agreement for a study into the revival of the Pau – Canfranc line was signed in 2017 by the French region of Nouvelle-Aquitaine, the Spanish region of Aragon, and the European Commission. The reopening of the international line linking Zaragoza – Canfranc – Pau is getting closer thanks to the collaboration of all the administrations and the support of the European funds obtained in two calls for proposals from the CEF financing instrument, in 2016 and 2019.

In June 2016, a French section between Oloron-Sainte-Marie and Bedous reopened. This section of around 60 kilometres between Pau and Bedous is used by local TER Nouvelle-Aquitaine passenger trains. Connecting buses currently run from Bedous to Canfranc while cross-border train traffic is not possible. Trains continue on the Spanish side from Canfranc International Railway Station, departing south to Jaca and Zaragoza.

In addition to implementing the standard gauge, the project for Huesca-Canfranc envisages equipping the line with the ERTMS (European Rail Traffic Management System) train control and command system to guarantee the interoperability of cross-border traffic. Moreover, 450-metre sidings will be built at the stations and an electrification plan will be made. The necessary actions will be defined for infrastructural elements such as level crossings, tunnels, bridges and overpasses and underpasses.

Adif also continues to make progress on other parts in the modernisation of the Zaragoza-Huesca-Canfranc line. The first phase of works on the railway platform in the area of Zuera (Zaragoza) was recently completed, and the company is currently making progress on the complete renovation of the track on one of the sections between Huesca and Canfranc, the Plasencia del Monte-Ayerbe section. The same works will soon be contracted on two other sections: Ayerbe-Caldearenas and Jaca-Canfranc.