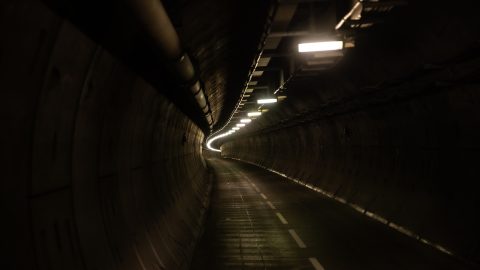 Hundreds of Eurotunnel passengers had to take to the service tunnel late on Tuesday afternoon following an issue with the 15.30 service from Calais to Folkstone. Eurotunnel Le Shuttle has issued an apology.

According to a EuroTunnel spokesperson, the train’s alarms went off, necessitating an investigation. Speaking to the UK’s PA Media, one of the passengers said they were told that there was an issue with the wheels that needed to be looked into. Passengers were then transferred to another shuttle using the service tunnel, which caused some discomfort and anxiety. Some described the 10-minute walk as something out of a distaster movie.

EuroTunnel said all passengers were transferred by 20.22 local time. The shuttle sent to recover the stranded passengers reportedly struggled to gain traction, another passenger said. In the end, those travelling on the 15.30 service spent six hours ‘on the road’. Regular service was resumed earlier on Wednesday.

Passengers were left stranded in the Eurotunnel after a train broke down inside.

Video shared on social media appeared to show travellers walking along the central service tunnel after their train broke down en route to France on Tuesday evening.https://t.co/Jo9nzHSzHq pic.twitter.com/GCgC8ADJoo

Robustness a la Industry…, however, regrettably, not a timely!
(Wares, TEU:s etc. has not got same option, when stranded…)
“Predictive maintenance” ( Verdict…) may provide for “optimal” maintenance…, but for clients, not the optimal…
It is 2022 now and infrastructure managers urgently have to provide for quality – the requested by clients!
A New Old Railway, a timely is needed, now!
(SWL with safety factors…, allowed, against safely limited systems forces…, should be basics…)