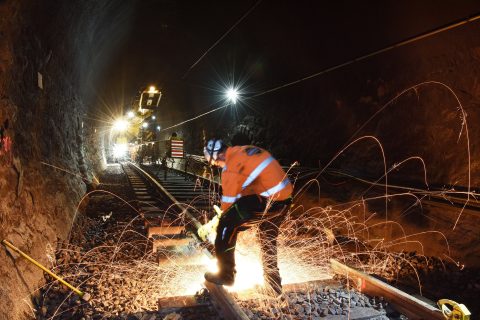 Bosruck tunnel renovation works in Austria all but complete

The major upgrade and renovation works on the Bosruck railway tunnel have been completed following a construction period of six years. ÖBB will put the finishing touches on the more than 100-year-old tunnel in the coming two weeks.

The 4,76-kilometre Bosruck Tunnel dates back to 1906 and was in dire need of renovation. Work began in 2016 with the overhaul of tracks and the surface underneath. Some 1,4 kilometres worth of new tracks were installed.

In March of this year, ÖBB turned to the renewal of the tunnel walls and overhead lines. Ageing concrete had to be removed across an area of around 10,200 square metres. According to the Austrian operator, the tunnel is now good for another 20 years of service.

The Bosruck Tunnel is part of the so-called Phyrn route between Linz and Selzthal, and also a key section of Austria’s north-south corridor for international rail traffic. It effectively links Germany and the Czech Republic to the area around the city of Graz and to Slovenia. ÖBB has been working on the expansion of the line to double tracks, as well as on overhauling tracks and switches since 1980. Stations along the route are also being upgraded. Next up is Kremsmünster, the renovation of which will be completed in 2023.