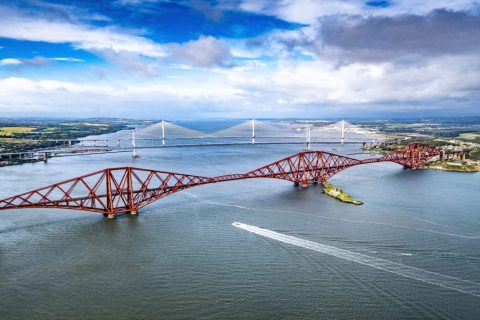 Network Rail, the UK infrastructure management agency, is currently concluding a lengthy protection and maintenance programme on a World Heritage Site. It also happens in one of the most iconic structures across the railway network. They are in the final stages of refurbishing the world-famous Forth Bridge near Edinburgh in Scotland.

The phrase “painting the Forth Bridge” has passed into British conversation as a metaphor for an unending task. However, Network Rail is coming to the end of a programme of work that will at least pause that endless task for the best part of a generation. That’s just as well because the Forth Bridge is busier now than at any time since its opening in March 1890.

Finally, put an end to the myth

Balfour Beatty, the contractors to the infrastructure agency, have been working on the bridge. They are currently refurbishing and repainting the North Queensferry approach span of the bridge and are due to finish this year. The team has repaired any damage and applied a new glass flake epoxy paint using the iconic Forth Bridge red colour. Now completed, this job will not have to be carried out for another 30 years thanks to the new paint system.

Since the bridge was commissioned, it has been a non-stop task to keep it protectively painted. The current refurbishment project has been underway since 2001. While doing much more than applying new paint, that has meant spraying and hand painting an area of 230,000 square metres. “The techniques and paint we used during this refurbishment meant the bridge didn’t require a new paint until now”, said Network Rail. “This finally put an end to the myth that painting the Forth Bridge is a never-ending task.”

Although most of the traffic over the Forth Bridge is currently passenger, the route it carries connects the entire East Coast of Scotland and extends the main line from London to Dundee and Aberdeen. Until the demise of the deep coal mining industry, significant bulk flows crossed the bridge every day. Until recently, supplies for the Longannet power station also occasionally used the bridge.

Future freight flows could include workings to and from a resurgent Rosyth Docks if plans for that project reach fruition; and possible freight on the Levenmouth branch. Currently, the bridge is used for bulk and intermodal flows between Aberdeen and east coast destinations.

All set for electrification, then? The only question is what colour will be the masts. Red, we presume. Forth Bridge red.