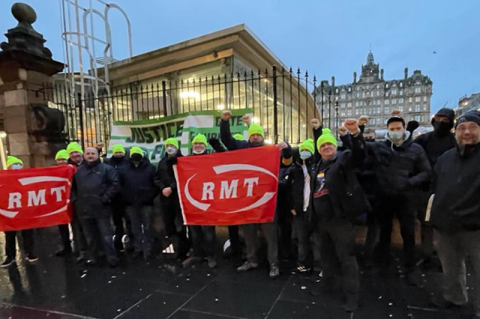 The UK may be on the verge of what trade union RMT calls the biggest rail strike in modern British history. The union plans to ballot its members in the railway sector, asking to back strike action. The ballot, which opens on 26 April and runs until 24 May, could result in labour being withdrawn from fifteen passenger train operating companies in England and Wales, as well as over 40,000 railway workers from Network Rail, the national infrastructure agency.

The RMT union says Network Rail intends to cut at least 2,500 safety-critical maintenance jobs as part of a 2 billion GBP reduction in spending on the network. Meanwhile, staff of train operating companies have been subject to pay freezes, threats to jobs and attacks on their terms and conditions.

Echoing the strikes of the 1970s, and even further back into the crippling strikes in the 1920s that culminated in the General Strike of 1926, union leaders have said that if members vote “yes” in the ballot, and breach the “anti-trade union” legal threshold for turnout, then a national railway strike could begin as early as June.

Fears of worsening industrial relations have been voiced already this year, with trades union sources making dire warning of a summer of discontent on the network. “Railway workers have had to contend with pay freezes, the prospect of losing their jobs and repeated attacks on their terms and conditions”, said RMT general secretary Mick Lynch. “Removing 2,500 safety critical jobs from Network Rail will spell disaster for the public, make accidents more likely and will increase the possibility of trains flying off the tracks. Train operating companies have praised our members for being key workers during the pandemic but have refused to keep staff pay in line with inflation and soaring living costs.”

Disquiet north of the border

In Scotland the railway has been effectively renationalised since the beginning of the month. The RMT says it has evidence that the Scottish government’s Transport Scotland department has directly requested for Network Rail to cut the funding for railway operations, maintenance, and renewals across Scotland.

“An Freedom of Information request passed to RMT shows Transport Scotland requested that Network Rail reduce its baseline budget by 65 million GBP in both 2022/23 and 2023/24”, says a statement from the union. “This new evidence is in direct contradiction to official responses from the Scottish Government when asked previously about cuts to renewals and maintenance funding.” Because of impending local authority elections in Scotland, restrictions on public comment mean Transport Scotland and other government agencies are unable to comment until after 5 May.

“This new evidence is absolutely shocking and shows the Scottish Government playing fast and loose with passenger and railway worker safety”, said Lynch at the RMT. ”It was only a few weeks ago that the full report into the tragic and avoidable rail disaster at Carmont was published, which highlighted the systemic and structural failures in safety caused by fragmentation of maintenance and renewals.

“These cuts have the potential to make things worse and I am renewing our calls on the Scottish and UK Government’s to put an immediate halt to these planned cuts and wider plans by Network Rail to cut thousands of safety critical maintenance jobs and instead guarantee that the necessary investment in the rail infrastructure and modern communication systems to keep the railways safe will take place.”

The force of reasoned argument

Lynch went on to say that thousands of railway workers have seen their living standards “plummet” and have run out of patience. “The way for trade unions to effectively take on the cost-of-living crisis is to stand up for their members at work and take industrial action when employers are not moved by the force of reasoned argument.
A national rail strike will bring the country to a standstill, but our members livelihoods and passenger safety are our priorities.”

While the fifteen passenger operators targeted range from South Western Railway to LNER, the operations of freight carriers are potentially compromised if safety critical operational staff withdraw their labour from Network Rail posts. Tim Shoveller, regional director for Network Rail, defended the soon to be disbanded agency’s position. “”We cannot keep relying on government handouts, and so we must work together with train operators and our trade unions to save millions of pounds and deliver a more efficient railway”, he told a BBC interview.

Separate action is also proposed in Scotland, where the majority of passenger operations have just been brought back into public management after the local government exercised a break clause in its franchise contract with Dutch company Abelio.