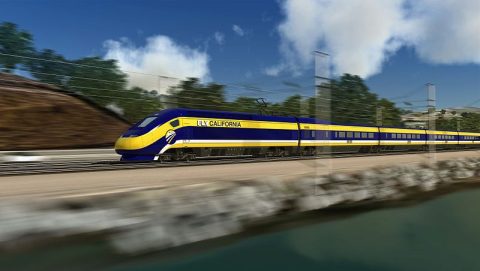 Of California’s registered voters, 56 percent support the state continuing to build the high-speed rail project according to a new survey by UC Berkeley’s Institute of Government Studies. The new railway, of which the first phase is under construction, is awaiting the approval of a 4.2-billion-dollar budget request (3,89 billion euros).

It is now fourteen years after California voters approved funding to begin building a statewide high-speed railway. The new survey shows that the majority is still in support of the project. Even if, as is currently planned, its operations only extend from Bakersfield to Merced in the Central Valley by 2030 and to the Bay Area by 2033. Thirty-five percent of voters said they are opposed.

Views about continuing to build the high-speed rail project are highly partisan, with nearly three in four Democrats (73 percent) backing the project compared to just 25 percent support among the state’s Republicans. The U.S. High-Speed Rail Coalition sees the results confirming what they believed for a long time. “That the great majority of Californians want electrified high-speed rail to help them alleviate congestion, avoid high gas prices, and address the climate crisis”, said Ray LaHood, former U.S. Transportation Secretary and co-chair of the U.S. High-Speed Rail Coalition.

The California high-speed rail project is said to be at a ‘critical juncture’. Governor Newsom has submitted a 4,2-billion-dollar budget request to fund construction work now underway in the Central Valley and to advance key contracts to continue progress on the project which is now awaiting approval by the Californian legislature. This bond appropriation is the remaining allocation from the original bond (Proposition 1A) approved in 2008 to initiate construction on the California high-speed railway.

Approval of the 4,2-billion bond appropriation would signal continued support by the State of California, creating the opportunity for more federal investments. The California High-Speed Rail Authority is currently competing for billions of dollars in competitive grant opportunities in the Bipartisan Infrastructure Law, as well as billions more in the pending budget reconciliation bill, which includes 10 billion dollars in dedicated funding for high-speed rail projects.

These state and federal investments together could help accelerate the completion of an initial operating segment of California’s first high-speed railway.