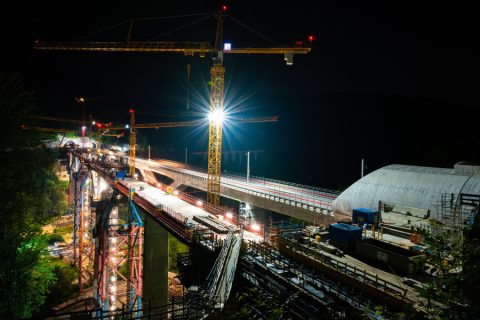 Deutsche Bahn will invest a record sum of 13,6 billion euros in rail infrastructure in 2022, some 900 million euros more than in 2021. The company will channel investment towards tracks, switches, bridges and stations. It will be hiring an additional 4.800 engineers for the infrastructure overhaul.

The investments are made as part of the New Network for Germany Programme, which will see Deutsche Bahn (DB) renew around 1.800 kilometres of track, 2.000 switches, 140 bridges and 800 train stations.

Key to the plan will be to increase the capacity of the German network. DB has identified 14 priority projects to that end, including a new high-speed rail line between Wendlingen and Ulm. This 60 kilometre-section is expected to be inaugurated before the end of the year. Another major project will be to expand the line between Karlsruhe and Basel to four tracks, enabling speeds of up to 250 kilometres per hour.

DB will also be looking to make advances in digitalisation through the digital interlocking (DSTW) programme and the rollout of ETCS. The railway traffic control centre Donauwörth will start using the electronic interlocking system this year. The ICE’s between Hamburg and Munich and between Berlin and Munich both call at Donauwörth station.

Finally, DB will also revamp some 800 stations, which amounts to around 15 percent of the total number of train stations in Germany. The railway company has earmarked 1,75 billion euros for the overhaul. A large portion – some 700 million euros – will be channeled towards the main hubs and the stations along the most important feeder lines.