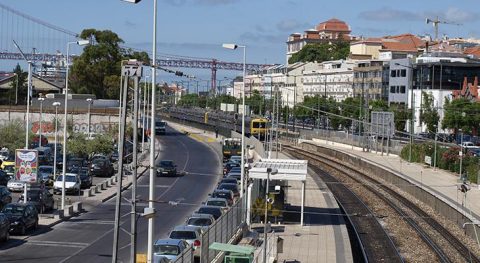 Infraestruturas de Portugal has awarded Thales three new contracts for the modernisation of signalling systems. This includes ETCS level 2 on the Cascais line and new electronic interlocking, among other things.

Under the contract, Thales will modernise the signalling systems of the Cascais Line, the West Line (between Meleças and Caldas da Rainha stations) and Santa Apolónia Station in the Lisbon region.

The scope of these contracts includes the supply of the new electronic interlocking PIPC G3 (Generation 3). Interlocking prevents a railway signal from giving the green light as long as it is not guaranteed that the section following that signal is safe. Also, European Train Control System (ETCS) will be rolled out on the Cascais line, in Level 2, where the train movement is constantly supervised by constant communication via radio-based GSM-R between the train and trackside.

Next to this, Thales deploy a new train detection system (track circuits), point machines, level crossings and the power supply system, in line with the solutions already deployed on the Portuguese network by Thales. The company will be responsible for the design, validation, supply, installation, testing and commissioning, safety, civil works and 10 years of maintenance.

During the last decades, Thales has been active in the Portuguese Railway Infrastructure Modernisation programme. This started in the early 90’s with the introduction of new electronic interlocking systems and telecommunications and passenger information systems.

Additionally, Thales was also responsible for the design and implementation of the new Lisbon Operational Control Centre, covering 90 percent of Portuguese rail traffic today. The company also played a significant role in pioneering in Portugal by the introduction of ETCS Level 2 on the Beira Alta Line and in the International South Corridor (Évora-Elvas-Caia).