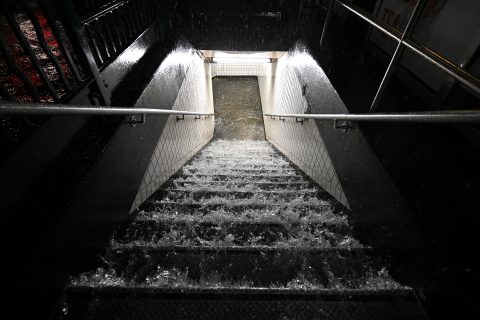 Subways are shut down in New York City because stations were flooded due to heavy rainfall. Some subways are stuck between stations, but the underground network writes that no one is in danger.

The aftermath of Ida, the hurricane that caused massive damage in the US state of Louisiana on Sunday, is now also affecting other parts of of America. In New York City, authorities have issued a warning of flash floods and subways are stuck between stations, and subways are no longer running.

“If you are stuck in a underground, stay in the carriage, that is the safest place unless the conductor says otherwise”, the metro network wrote on Twitter. At least a half dozen subway trains stuck between stations were evacuated, and service remained “very limited” on Thursday morning, said the Metropolitan Transportation Authority to the New York Post.

Images on social media show how metro stations in the city have been flooded. The mayor of the city, Bill de Blasio, declared a state of emergency on declared a state of emergency on Wednesday night. “This is a historic event”, said de Blasio, who speaks of record amounts of rain. “This much rain does not happen often in this region, we could have deadly floods like last week in Tennessee”, meteorologist meteorologist Brandon Miller told CNN.

Warnings for tornadoes were in effect Wednesday in the states of Pennsylvania, New Jersey and Delaware. “This is a life-threatening situation, flying debris can be deadly”, said the US Weather Service. There is a chance that the storm will also cause tornadoes in New York, although forecasts vary.