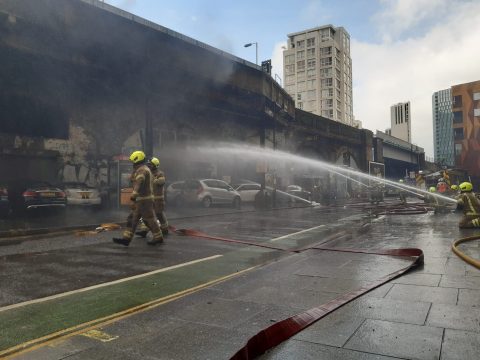 Six people were injured in a fire at Elephant and Castle train station in London on Monday afternoon. Due to the flames that arose, part of the skyline of the city was covered by a large black plume of smoke. About ten fire trucks and a hundred firefighters went to the scene to extinguish the blaze.

Train traffic to and from Elephant and Castle station could be resumed on Tuesday morning. It is still unknown how the fire broke out. Police say there are no indications that it was a terrorist act. The Victorian arches at the station survived the fire without structural damage. The rails also remained undamaged, rail manager Network Rail reported to the Evening Standard.

Of the six people treated at the scene by paramedics, one was taken to hospital. Around 600 people were evacuated from surrounding properties as a precaution and all trains were stopped from coming into the over ground station. Video footage shows a fireball emerging from the station. Three stores went up in flames in the fire. There was also a fire in cars and a telephone booth.

Fifteen fire engines and around 100 firefighters were called to a fire near Elephant and Castle Railway Station, says the London Fire Brigade in a statement. Station Commander James Ryan, who was at the scene, said: “There were significant road closures in place and people were asked to avoid the area. Local people were advised to keep their windows and doors closed whilst firefighters worked to bring the fire under control.”

Their fire investigation team will return to the scene of the Elephant and Castle fire on Tuesday to continue their work to try and establish the cause of the blaze. Train operator Thameslink says power has now been fully restored to the station information screens.

Apparently a repair shop underneath Elephant and Castle station has caught fire. Hope everyone is safe. #London #ElephantandCastle pic.twitter.com/jy3DOCnw9B