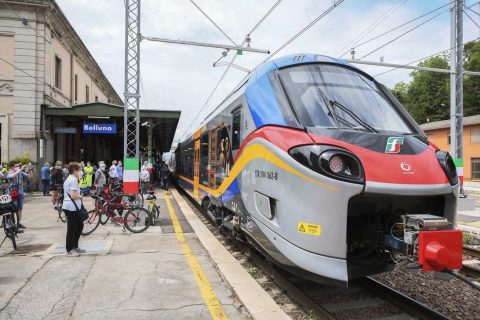 The finished new line was presented last week during the “Venice and the closest Dolomites” event, with President of RFI Anna Masutti, the Director of the Regional Transport Division of Trenitalia Sabrina De Filippis, President of the Veneto Region Luca Zaia, and the Minister for relations with the Parliament Federico D’Incà.

“In addition to saving time on the journey from Venice, we will no longer have a load break in Conegliano and therefore we will finally have direct trains for the Venice- Belluno and Belluno-Venice”, said Luca Zaia.

The 47 kilometres of electrified line will allow a significant reduction in travel times. Partly thanks to the possibility of travelling the entire route between Venice and Belluno on a single train, without having to change in Conegliano with a diesel-powered train.

From Monday to Friday, a scheduled service between Venice and Belluno consists of 13 connections between the two cities, eight of which without changes saving 12 minutes – and five with train changes in Conegliano. Also seven direct services will be available from Venice to Belluno and six with change in Conegliano. Slight changes are foreseen on Saturdays, Sundays and holidays.

The new direct links between Venice-Belluno will be operated almost exclusively with the new ‘Pop’ electric trains, of Alstom’s Coradia Stream family. They have over 300 seats and up to 230 standing seats. The trains are part of the contract signed by the Veneto Region and Trenitalia for the delivery of 78 new “green” trains to renew the fleet of FS Italiane. In total, 47 Rock and 31 Pop trains were ordered, an investment of over 660 million euros. The new regional trains are 95 percent recyclable with a 30 percent reduction in energy consumption.

The electric traction trains have higher performance than the previous diesel vehicles and will therefore be able to fully exploit the potential of the line, reaching the maximum speed allowed with greater ease and, by virtue of the better acceleration starting point, expanding the margins of recovery of any delays.

The investment for the electrification of the line amounted to 55 million euros and is part of RFI’s overall electrification programme for the lines in the Veneto basin and the Belluno ring for a value of over 200 million. The work has a strategic value also in view of the Milan – Cortina 2026 Winter Olympics.

One the line, the Train Running Control System (SCMT) was installed as well. It supports drivers in driving and improves the reliability of the railway infrastructure. In addition, three level crossings in the Conegliano-Vittorio Veneto section have been removed and the Fadalto and Santa Croce tunnels have been adapted to European standards. Finally, to facilitate crossings in the stations, interventions were carried out on the platforms in the stations of Belluno and Vittorio Veneto.