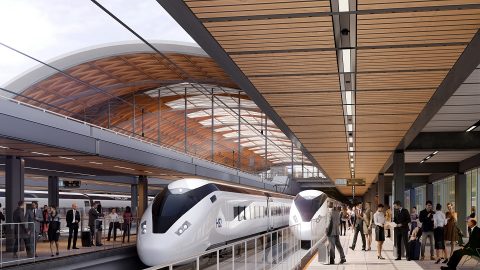 HS2 will unlock capacity of three mainlines in UK

The planned High Speed 2 (HS2) railway from London to Birmingham and Crewe will be a powerful stimulus for the further development of the UK’s rail sector. Among other things, it will free capacity of three key mainlines in the country. This unlocked potential could be used for launching new commuter train services and shifting more freight from roads to rails.

The new high-speed railway between London and the cities of Northern England will be constructed as a separate line. It will be dedicated only to high-speed passenger trains. As a result, HS2 will create additional opportunities for increasing freight and commuter traffic on three Britain’s important mainlines. One of them is the West Coast Main Line, which is considered to be the busiest mixed-use railway in Europe. At the moment, it runs at its full capacity and has no possibility to serve new more passenger and freight trains. Two other routes are the West Midland and East Coast mainlines. In this case, HS2 will provide additional capacity for these routes.

“HS2 will unlock much-needed capacity on the West Coast Main Line, and eventually on the East Coast and Midland main lines as well. This additional space can be used by both passenger and freight services that will reduce car and lorry journeys, reducing the amount of carbon emitted by transport, and helping Britain reach its goal of net-zero emissions by 2050,” Ben Rule, Infrastructure Management Director at HS2 Ltd, said.

On the one hand, HS2 will free some capacity for regional and commuter trains that make much more stops than the high-speed ones. “Released capacity is the space that’s left on the railway once the non-stop trains transfer to HS2 and the opportunity then comes to refill that space with trains that do stop at stations. That could provide more capacity for London commuters, but also potentially improves the connectivity to places northward such as Birmingham,” William Barter, an independent rail consultant, explained.

According to him, HS2 will be operated as ‘a sort of high-speed metro’ focusing only on the high-speed long-distance traffic. “That eases the burden on this railway (the West Coast Main Line – RailTech) in turn, as it reduces the different types of train that this railway has to deal with and it can be redesigned to concentrate on the needs of local, commuter and inter-urban travellers,” he added.

On the other hand, this specification of HS2 and the conventional mainlines will benefit to the modal shift. This means fewer lorries on roads and more wagons on rails. “The construction of HS2 will allow high-speed passenger trains to operate on their own dedicated railway. This will free up additional capacity on the existing railway network to allow more freight trains to be run,” David Fletcher, Director of Rail at Cappagh Group of Companies, noted.

A freight train is able to remove up to 76 lorries from Britain’s roads. In order to deliver more construction materials London by rail, Cappagh Group is building a new rail freight terminal in Wembley, which will be located on the West Coast Main Line. “Ther more capacity there is on the West Coast Main Line to run freight trains, the more we can reduce the environmental impact of construction supply chains,” Mr Fletcher summed up.