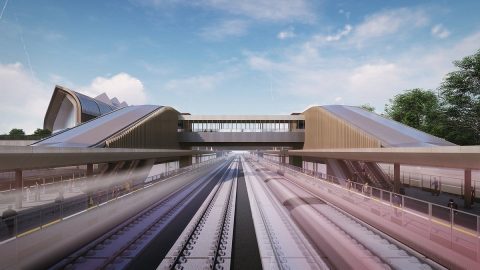 The HS2 project is moving further in the United Kingdom. After launching the procurement to purchase the lifts and escalators, the government-funded company High Speed Two Limited has drawn attention to signalling and slab tracks. It started two dedicated processes, which will be finalised in 2022.

Among the latest developments is the procurement for the design and build of the signalling systems and their technical support for the period of up to 25 years. It was launched on Friday, 15 May, and is valued at 540 million British pounds (606 million euros). The signalling solutions will be deployed alongside the planned HS2 line from London to Birmingham and Crewe where the trains will run at a maximum speed of 360 kilometres per hour.

The tender specification suggests that the shortlist will be announced next year while the contract will be concluded in 2022. The winner will be committed to perform the following range of works:

Two weeks earlier, on 4 May, HS2 Ltd kicked off another tendering process. It is devoted to the design and construction of the complex track systems on the HS2’s mentioned route. “Rail systems are some of the most important parts of the HS2 project – the high tech equipment and systems that will allow our trains to deliver unparalleled service in terms of speed, frequency and reliability,” said David Poole, Procurement and Commercial Director at HS2 Ltd. According to him, the construction works at their peak will support around 36,000 jobs.

This procurement is valued at around 2 billion British pounds (more than 2.2 billion euros) and is divided into four packages. As the tender specification reads, the winners should deploy the slab tracks instead of the ballast ones commonly used on the UK rail network. The future contractors will also take a lead role in managing and coordinating the complex interfaces between the track and other elements of the rail systems. In addition, they will be responsible for the design, installation and testing of switches and crossings, managing construction logistics and co-ordination, and supporting the testing and commissioning phase. As for the timeframe, it is similar to the signalling procurement.