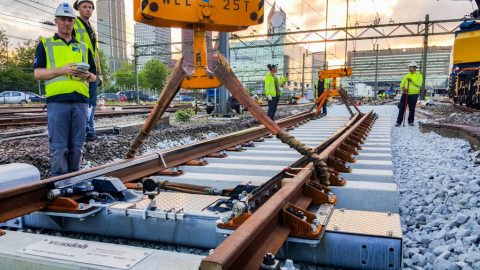 In the Netherlands, hundreds of new switches are installed every year. They are positioned on the basis of measurements, mental arithmetic and the placement of a distance measuring gauge. Consequently, the chance of errors is relatively high, as are the costs and the resultant damage. The WPS (Wissel Positionering Systeem, or Switch Positioning System) from Rail 1435 promises to improve this.

When a new switch is installed in the wrong place, it is often unclear how it happened and who is responsible. Engineering company Rail 1435 from Baarn has developed a system to install switches more quickly, accurately and safely. Their electronic Switch Positioning System (WPS) was recently put on the market by Alom Railway Engineering & Supply.

No longer done by sight

“It is a tool that you stretch across the switch: one at the front, and one at the back. In the middle of each clamp there is a prism with which you can make a visible, fixed measuring point to ensure it corresponds with the coordinates on the drawing”, explains Pascal van der Zwalm from Rail 1435. “Previously this was done by sight, and the surveyor had to measure and calculate where the switch should be put.”

“In the design, a number of invisible theoretical points are used to determine the positioning of the switches. Their precise positioning depends on the surveyor’s knowledge and skills. It is often a lot of work for surveyors to get the switch in the right position, and they cannot always do it to the same level of precision. The WPS makes the theoretical points visible in the switch, so it can be installed precisely, right down to the last millimetre. Alongside this, it provides a uniform system for installing and monitoring switches.”

According to Van der Zwalm, switches are installed in the wrong place between two and five times per year. The costs to rectify this can easily reach tens of thousands of euros. Such measuring errors cause a lot of headaches for constructors, as well as expensive delays, and can have serious knock-on effects for the rest of a construction project. A set with clamps costs around 5,000 euros; an investment that, according to Rail 1435, is quickly earned back. Because not only does it prevent errors and the associated costs, but it also saves time — approximately 15 minutes per switch. “In some projects, between ten and twenty switches are replaced or installed in one weekend, so you’re able to save two hours. This gives you a buffer to deal with any unexpected setbacks.”

Rail 1435’s system can be used with every switch. In each set, there are three clamps, one of which is for an English switch. The clamps each weigh 2.5 kg and are 1.30 metres long, and the whole thing can be put in the boot of a normal car. Besides the quicker and more precise installation of switches, the WPS also ensures a safer workplace. “You fix the clamps before the crane hoists the switch and puts it into position. This means that the surveyor can position the switch from a safe distance. Until now, he or she has had to keep walking between the front and back of the switch while it is being positioned to ensure it’s being put in the right place, with all the risks this entails. With the WPS this is no longer necessary”, explains Van der Zwalm.

In total, Rail 1435 has been developing the system for five years. “We started in 2015 and three years later we had the current product. It won an innovation prize at the trade fair RailTech Europe in 2017, and since then we have continued developing the system.” The company says that there are already four construction firms using the WPS with great satisfaction. To increase the product’s reach, Rail 1435 recently formed a partnership with Alom from Arkel in the Dutch province of Zuid-Holland. Sets can now be either bought or rented from Alom.

“Our focus is on innovation and service provision for contractors working on large projects. We are good at coming up with and developing ideas. Where we are less good is realising these ideas, which is why we have gone into partnership with Alom. They are not only selling but also renting out the system. Alom has a better service package for renting out and delivering tools. The WPS already has a European patent, and both Alom and ourselves believe there is now an opportunity to expand internationally.”