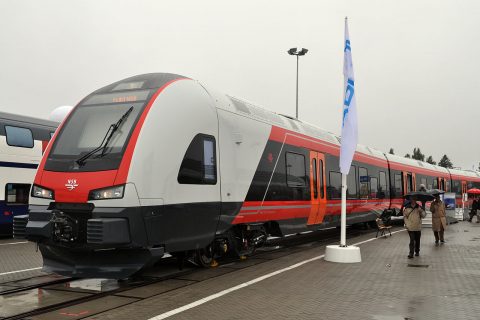 Norway to spend 2.8 billion Euros on railway network in 2019

The Norwegian government is planning to spend 26.4 Norwegian kroner (2.8 billion Euros) on the country’s railway network in 2019. That’s a 12.4 per cent increase from the 2018 budget. The money will be spent on several infrastructural projects and the purchase of new rolling stock.

The government also proposes to allocate almost 17 million Euros to the refurbishment of rolling stock and the phasing in of new. New trains will operate in the Eastern Region and the Voss Line.

Norway is working on several projects to improve the railway network. The construction on new double-track alignments on several parts of the Vestfold Line, which will reduce travel time and significantly increase the frequency of services between Oslo and Tønsberg, will start in 2019 and is expected to be completed in 2025. The construction of the Ringerike Line will be started. This is a 40 kilometres extension of the Bergen Line from Hønefoss to Sandvika.

During the next 15 years, the European Rail Traffic Management System ERTMS will replace all existing signal systems on the rail network. The next two lines on which ERTMS will be implemented are Gjøvik and Nordlands.

“We continue the work of transforming the Norwegian rail network into a modern and well-functioning transport system that can carry large volumes of passengers to their workplaces each day in an environmentally friendly way”, says Minister of Transport and Communications Jon Georg Dale.