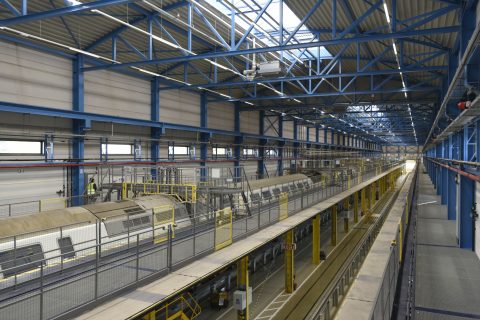 The Belgian operator NMBS officially opened a new servicing shed in the renewed traction workshop in the Belgian city of Hasselt on Monday. This is part of an extension of the traction workshop, where trains are repaired and maintained in the short term. The existing work hall in Hasselt will be renovated. This work will be completed by the end of 2018.

The modernization involves an amount of 25 million euros. The place is designed to maintain double-deckers. This includes the future M7 trainsets from Bombardier and Alstom, which will be delivered from 2020 onwards.

The work hall, where more than 200 employees work, is equipped with modern technologies to maintain material efficiently and sustainably. The hall is completely built according to environmental regulations. This way the rainwater is collected and wastewater is treated. There is also space outside the hall to clean the trains, empty toilets and refill water.

The goal of the new workshop is to increase the availability of rolling stock. Because the new hall has two 200-meter-long continuous tracks and work platforms along its entire length, trains can be maintained without being disconnected. Maintenance takes place at night and during the day the train can be used again for passenger transport. This is called the block train principle. Thanks to its length, the traction workshop in Hasselt is one of the first workshops where a train will be maintained according to this principle.

The existing maintenance site in Hasselt will be renovated. The work wells are being modified and part of the roof is being raised. This work will be completed by the end of this year.

The renewal is part of a program to give all maintenance facilities an update. In total, SNCB made 300 million euro available for this remodelling program. This is the second workshop to be completed; in April the maintenance installation in Liège was opened. The next facility to receive an update is the one in Melle. It replaces the existing workshop in Ghent.

NMBS has nine traction workshops in total. These are intended for short-term maintenance and repair for locomotives and trains. The workplace in Vorst specializes in the maintenance of high-speed trains, such as Thalys and TGV trains from the French rail company SNCF. The Belgian carrier also has four central workshops, where more thorough maintenance can be carried out and trains are modernized.