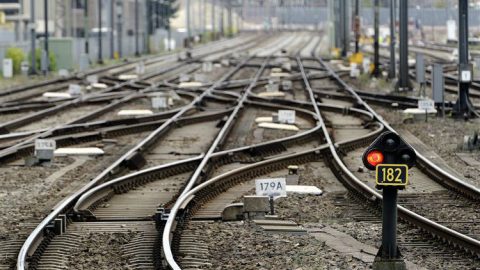 Ricardo Rail has been training rail technicians to maintain the Dutch national track signaling system ATB since 2004. In the past 14 years, the course offering has been extended widely, so the company now gives the training in four different countries, in four different languages.

Ricardo Rail delivers a three-day maintenance training to technicians from NS, SNCF, NMBS/SNCB, DB and other maintenance companies in the Netherlands, Belgium and Germany. The German ICEs, the French Thalys trains and a number of Belgian freight trains cross into the Netherlands and so use the Dutch safety system.

Trainer Johan van Bessen from Ricardo Rail: “Only certified personnel can carry out maintenance of ATB installations. The trainees have usually followed an electro-technical course and we give them further training so they can perform all maintenance tasks for the ATB system, including installation, calibration, visual inspection and fixing the most common defects.”

The foreign operators take courses in which they learn about the combination of track safety systems. “For the Thalys trains and the ICEs, a specific ATB system has been developed, which is combined with the European safety system ERTMS. In the NMBS/SNCB trains there is a combination of the ATB and the Belgian TBL system, which also requires a specific methodology from the technicians.”

Ricardo now offers eleven different ATB training courses, delivered by five trainers. Two trainers will soon join the team, once they have completed their own training. And this expansion is really necessary, says Van Bessen, because Ricardo Rail offers over thirty training courses per year.

“The Netherlands has two ATB principles,” explains the trainer. “The old generation (EG) sends the information via the track circuit and the New Generation (NG) via balises/beacons.” Ricardo Rail offers training for both principles. It can also train technicians to maintain ERTMS installations on trains.

The ATB training consists of half a day of theory and 2.5 days of practice, and takes place on location at maintenance companies in the Netherlands, Belgium, Germany and France. In the theoretical part, participants learn all about the ATB installation, as well as the peripheral equipment and corresponding interface with the cabin.

In the training, Ricardo Rail places emphasis on the practical part. “We believe in a pragmatic approach in which training is based on the cornerstones of knowledge, insight, skills and conduct. Our experience is that the best learning process is when participants carry out and repeat the procedures themselves. The main goal is that at the end of the training they can conduct the maintenance tasks on their own.”

An important part of the training is searching for defects. “The trainer builds in a defect and then the technicians, in small groups, try to fix it. They work using testing equipment, training documents and circuit diagrams. The correct interpretation method is very important here, as ‘after all, measuring is knowing’, but also ‘know what you measure’. During this training, all of the most common ATB defects are looked at. We prepare the technicians to fix their first defect in the field.”

“As an extension to the ATB training, we offer analysis training, which looks more specifically at internal fault code memories so training participants learn to fix the more serious and recurring defects.”