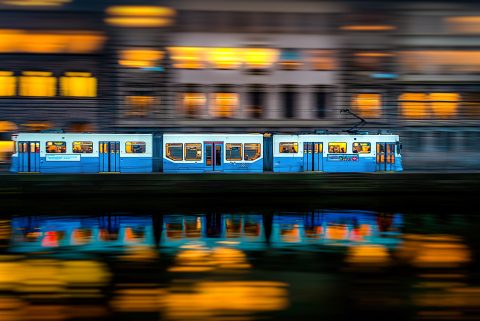 What can countries learn from Sweden when it comes to multi-modal ticketing?

Already a frontrunner in ticketing for public transport, Sweden will be the first country to have a nationwide ticket distribution system based on the Open Sales and Distribution Model (OSDM), developed by Estonian-based company Turnit. “What we work on with Samtrafiken in Sweden is an exemplary use case for the rest of Europe in making end-to-end journey booking easy”, says Andres Osula, Turnit Founder and Chairman of the Board to RailTech.

A shift in the ticketing in Sweden came when the national railway operator SJ announced they would change their reservation and distribution system. Because of this change, the rest of the public transport market also started looking for new and improved technology. Samtrafiken, an organisation owned by the main stakeholders of public transport in Sweden with the goal to ensure interoperability across the market, chose to partner with Turnit to establish a new, nationwide distribution system, called NDS. Since 20 years ago, Samtrafiken has provided the product Resplus, which combines rail, coaches, buses, ferries, trams and metro in one ticket.

Samtrafiken is owned by more than 40 shareholders, and coordinates digital solutions for the whole bus, rail, and urban multi-modal transport for Swedish local authorities and passenger transport companies. The agreement with Turnit will transfer the country’s multimodal ticketing scheme Resplus to the Turnit platform. The NDS is planned to go live in its first release during the third quarter of 2023. “The NDS has to go live with all market participants at the same time, which involves a lot of coordination. We are working with other providers such as Sqills for SJ to make sure there is a good technological synchronisation”, says Osula.

The role of Turnit in the whole booking ecosystem is not directly visible to passengers, but plays a central role. Say someone books a trip from a Swedish town to an address in Stockholm, using the website of rail operator SJ. When the NDS is in place, what Turnit does with their product Turnit Hub, is collecting and sending requests to the ticketing systems of different carriers, such as railway operators, bus or ferry booking platforms, or local city transport authorities.

Via an OSDM protocol, this request for different operators is split, and the system checks journey planner options, fares from each party and collects this information and combines the different ticket products into one ticket. This includes all relevant QR-codes, which go back to wherever source the person is buying the ticket from.

OSDM is a specification developed by the members of UIC, the worldwide railway organisation, and leading ticket vendors like Amadeus, SilverRail, Trainline and more. “The main idea of OSDM is that instead of each having their own proprietary API (Application Programming Interface ), which is costly, ticket distributors and operators adopt OSDM API’s so that distribution services all talk the same language. Having a common language like OSDM that is developed by the industry builds trust for carriers to adopt”, says Osula. Not many railways have yet started implementing OSDM, and the project for Sweden is the first to implement it on a nation-wide level.

With a Resplus ticket, passengers in Sweden are already assured to reach the final destination of their trip. The companies within the Resplus collaboration take joint responsibility for solving any problems that arise due to traffic disruptions. With the NDS, Samtrafiken can also rebook a ticket automatically for passengers who missed part of a journey leg due to a disruption. “However, if there is no central booking database, this is not possible, and the collaboration within Samtrafiken that started with Resplus is quite unique”, says Osula. He sees it as an exemplary use case for other European countries.

“There is a huge hype around Mobility-as-a-Service (MaaS), with many startups working on it. But there has to be very strong trust for service providers to succeed. Samtrafiken is communal with almost all players of the public transport involved, even though there is no legal obligation to participate in this scheme whatsoever.” A similar approach for European-wide distribution of tickets might be a good way forward. “Building a cooperative organisation responsible for open and neutral distribution of mobility products”, says Osula, “instead of having new regulations in place or waiting for the market itself to figure things out.”

“Samtrafiken’s and the Swedish approach to public transport is already today in many aspects number one in the world. When adding Turnit’s commitment to work with OSDM as a modern standard for the rail industry, an upgraded Resplus will be an eye opener for many other countries in Europe in the coming years”, said Ülo Säre, CEO of Turnit, when the technology partnership deal was closed earlier this year.

“All the market leaders are board members of Samtrafiken and support this strategy”, added Göran Hägglund, Chairman of the Board of Samtrafiken.“We have been the forerunner in making the whole mass transit offering easily available for the travellers and see a prosperous future with this technology partnership with Turnit.” Starting off in the bus market, the first project in rail for Turnit was the ticketing system for Lithuanian Railways LTG, which it implemented in less than one year.

1 comment op “What can countries learn from Sweden when it comes to multi-modal ticketing?”

What an amazing concept! Public and private transport working jointly in their given countries in the interests of efficiency and ultimately for patron satisfaction. And what year is this? (<: