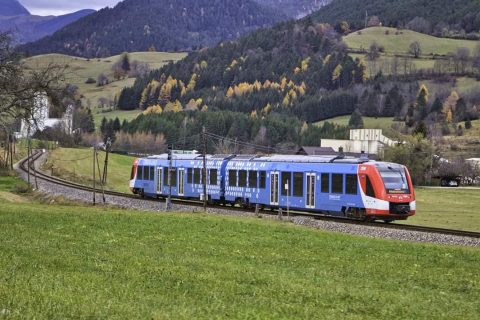 The Romanian Transport Ministry endorsed the procurement of twelve hydrogen trains on Wednesday. The trains will be financed by the country’s recovery and resilience plan, with funding from the EU.

Secretary of State in the Romanian Ministry of Transport Irinel Scriosteanu announced the approval on social media. The pilot project, implemented by the Railway Reform Authority, calls for the purchase 12 vehicles with 160 seats each. The total cost of 973 million euros also includes the realisation by the future train supplier of the associated hydrogen fuelling facilities, plus 30 years’ worth of train maintenance.

The trains will run on non-electrified routes such as from Bucharest Central Station to Bucharest Airport (every half hour) and on routes from the north of Bucharest City and Ilfov County to the neighbouring counties of Argeș, Dâmbovița and Giurgiu. “Thanks to the reliability of the new vehicles”, the trains will also reach Olt and Dolj counties, Scriosteanu said.

The Transport Secretary included a picture of an Alstom hydrogen train running in Austria on his socials, but a supplier has not been announced yet. A market consultation for the hydrogen trains was launched in March this year. The Romanian Railway Authority did sign with Alstom for the delivery of 20 Coradia Stream trains for operations on electrified lines, which marked the rolling stock manufacturer’s first contract in Romania.

The financing of the investment project is carried out using non-refundable external funds from the EU – through Romania’s National Recovery and Resilience Programme –  and from the Ministry of Transport and Infrastructure’s own budget. In addition to the hydrogen trains, Romania will also study a first high-speed railway and carry out works to improve bottlenecks in the rail infrastructure as part of the recovery plan. In total, 3.9 billion euros of the Recovery and Resilience Plan will go to rail.

By replacing diesel traction with electric traction based on hydrogen fuel cells, transport emissions are reduced by 18,348 tonnes of CO2  and 306 tonnes of NOx per year, the equivalent of more  600,000 euros per year

According to the Romanian ministry, some 18,348 tonnes of CO2  and 306 tonnes of NOx per year can be avoided by replacing diesel traction with electric traction based on hydrogen fuel cells. It should contribute to reaching net-zero pollution in 2050, the objectives of the European and national strategy.

On first read it appears that Romanian authorities are forward thinking and environmentally oriented.

More focused, two questions come to mind:
(1) Does the nation have capability to supply a fleet of trains with a steady stream hydrogen fuel?
(2) To what degree will the A7- Moldova TOLL ROAD project (EU-funded)
degrade or cancel out the environmental gains made by use of hydrogen-fueled trains?