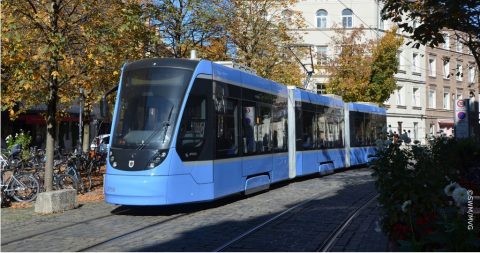 The results of testing semiconductor technology based on silicon carbide in a tram in Munich are in. A reduction of both noise and energy use was achieved with the tests by Siemens Mobility and Stadtwerke München (SWM).

The one-year test with the tram was successfully completed in August, and now it is clear what the testing delivered. It was found that the motor noise produced by the tram was reduced and that energy use declined during the trips on Munich’s public-transportation rail network. The semiconductor technology was produced by Infineon Technologies.

Silicon carbide (SiC) provides a number of advantages over silicon, the most common material of semiconductors. This element conducts electricity under certain conditions but not others, making it an ideal medium to control electrical current for electronic applications, of which an electric tram is one. The tests were conducted as part of the European research and development project PINTA and is an effort to integrate SiC power semiconductors into rail vehicles.

10 percent reduction of energy use

During the test in Munich, SiC semi-conductor technology was installed in one of two traction converters used by a three-car Avenio tram. The test phase included all development tests necessary to gain authorisation for technology’s use in passenger service that were conducted in the company’s system test center and in the vehicle.

The continuous monitoring of energy levels showed an approximate 10 percent reduction in energy consumption. The measurements also found lower noise levels during operations and an overall reduction in motor noise, how much exactly is not announced. The Avenio München tram equipped with a SiC core spent one year transporting passengers and covered a total of 65,000 kilometres in the process.

Next to PINTA, the tests were also part of European research and innovation initiative Shift2Rail. The goal of this initiative is to create a visionary rail system in Europe through targeted investments. Two of three project phases have now been completed: the initial planning stage and the successful vehicle test for the SiC converter.

The focal point of PINTA3 will be system optimisation created by the use of SiC in dual-system trams (TramTrain). The objective of the PINTA project is to fuel the introduction of SiC technology in order to lower life-cycle costs and thus bolster the rail industry in Europe. The technology is already being used in a range of industrial sectors, including automotive electromobility.