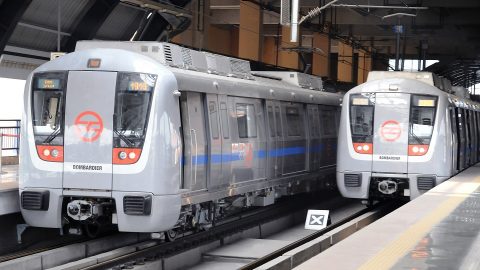 Canadian rolling stock manufacturer Bombardier Transportation has signed a new contract to deliver 40 additional Movia cars for Delhi Metro Rail Corporation. The operator of the rapid transit system in the capital of India will increase the Movia fleet up to 816 cars.

The new trains will boost the capacity of three Delhi main metro lines for 2,960 passengers. The order provides a high degree of localisation in manufacturing Movia vehicles. The metro cars will be produced at two Bombardier’s plants in the Indian state of Gujarat – in Savli and Maneja. The Movia trains integrate some innovative solutions developed by Bombardier: Mitrac propulsion and control system as well as Flexx Metro 3000 lightweight bogies. Besides the rolling stock, the Canadian manufacturer has already equipped Delhi Metro with its Cityflo 650 train control solution.

Bombardier Transportation is being developed the Movia metro train family since 2001. The cars of this type run in India since 2010. The initial vehicles for Delhi Metro were produced in Germany and Sweden. The train family is widely used in Asia. In addition to Delhi, the Movia units are operated in three Chinese cities (Guangzhou, Shanghai, Shenzhen), Singapore and Thailand (Bangkok Skytrain). Also, this type the metro systems in Toronto, London, Stockholm and Bucharest.