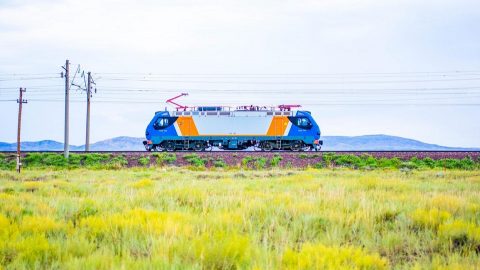 The production is carrying out in the EKZ facility in Nur-Sultan (former Astana), the capital of Kazakhstan. The subsidiary is a joint venture of Alstom and Transmashholding. Its staff consists of more than 550 people. For the new product line, Alstom plans to hire an additional 35 employees. The Prima M4 ‘KZ4AT’ locomotive is based on the Alstom popular platform widely used in Europe, Asia, Africa and North America. The vehicle was designed to operate in extreme weather conditions from -50 to +50 Celsius degrees. It is able to speed up t 200 kilometres per hour.

“We are proud to widen our activities by launching the new production line for passenger locomotives in Kazakhstan, which diversifies the country’s industrialisation program. The first passenger locomotive should be ready by the end of 2019 and then certified as a new and premier product “Made in Kazakhstan”, and we have a strong will to become an export platform in Central Asia,” said Guillaume Tritter, Alstom Managing Director for Kazakhstan.

The EKZ facility was opened in 2012. Initially, Alstom controlled only 25 per cent of its shares. In 2016-2017 the French company increased its package up to 75 per cent (the remainder is owned by Transmashholding). Last year, EKZ exported first two Prima T8 freight locomotives to Azerbaijan. In general, the company is obliged to deliver 40 units. In Azerbaijan, they are classified as type AZ8A.