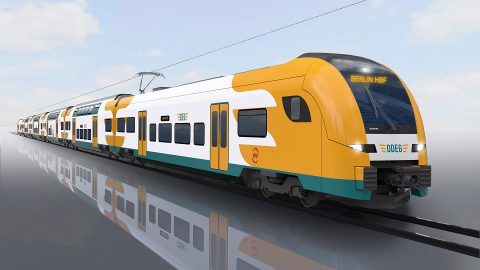 Siemens to produce 23 trains for regional service in eastern Germany

Siemens Mobility has concluded a deal with Ostdeutsche Eisenbahn (ODEG) for the delivery of 23 Desiro HC trains. The units will serve the company’s commuter lines on the new Elbe-Spree network in eastern Germany. The contract is worth 300 million Euros.

The deal consists of two parts – 21 six-car trains and two four-car trains. The Desiro HC units are composed of both single- and double-deck cars. Therefore, the vehicles are capable of providing high capacity. Each six-car train is capable of carrying 637 passengers on seats. The order also includes an option to upscale to 800 seats. The vehicles will be supplied in summer 2022. They will start to serve regional lines by the end of 2022.

ODEG will use the ordered trains on the regional services of the Elbe-Spree network. The six-car trains will connect Magdeburg with Cottbus via Berlin and Frankfurt (Oder), Brandenburg a. d. Havel and Frankfurt (Oder) and the four-car trains will serve the routes from Wismar and Wittenberge to Baruth and Elsterwerda/Finsterwalde via Berlin as well as from Wismar to Ludwigslust.

These routes were franchised to the company after the winning in the tender. “We have already started implementing our operating concept for the Elbe-Spree network. In addition to expanding our workshop and training facilities, the trains are a very important part of the concept”, said Arnulf Schuchmann, CEO of ODEG. 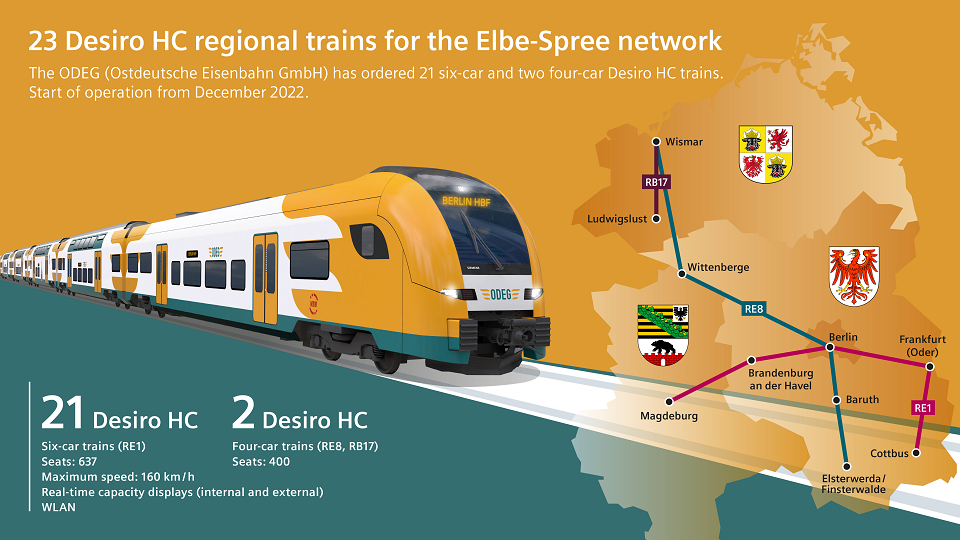 The trains will be accessible for stations both with 550 and 760 millimetres platform heights thanks to special sliding steps. They will be equipped with wider doors than those of the current fleet. The cars will have more space for bicycles, strollers and wheelchairs. Each trainset will include a multipurpose car with a barrier-free toilet. The units will have a video surveillance system inside the cars, inside and outside displays with real-time capacity as well as a special communication system in case of a conflict or problem. The Desiro trains will provide free Wi-Fi.

The new order has a double significance to Siemens Mobility. The first one includes an ordinary profitable deal while the other deals with the company’s headquarter. “Siemens was founded in Berlin and the city is still home to one of our company’s two headquarters. Given this background, we have very close and traditional ties with the Berlin-Brandenburg region”, noted Sabrina Soussan, CEO of Siemens Mobility. According to her, the Berlin office of the company’s Mobility business employs around 1,100 people and many of them travel daily to the German capital from the surrounding region. From 2022, they will be using Siemens trains.