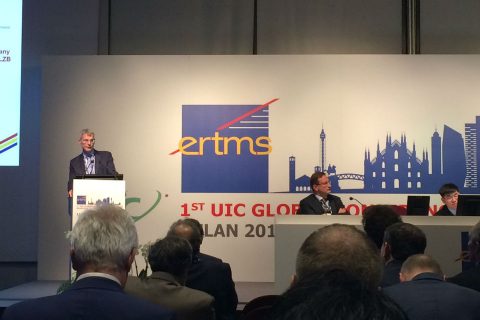 ‘ERTMS systems not installed in a uniform way across Europe’

The way in which different member states have installed the European safety system ERTMS often varies. Consequently, it is not a given that trains with an ERTMS installation can ride on all the tracks. This is not only an international problem, but also a national one — as discussed by Fernando Pascual from the European Court of Auditors and Peter Zijdemans from Ricardo Rail at UIC’s ERTMS conference in Milan last month.

At the end of last year, the European Court of Auditors published a report stating that the European safety system has been implemented in a fragmented way and therefore many routes cannot be connected to one another. On the routes that are connected with each other, there is a lack of compatibility.

“At this moment, there is no single On Board Unit (ERTMS installation on the train, ed.) which can be used to travel on all European track sections. For someone outside of the rail sector, this is very difficult to understand.”

Therefore, Fernando Pascual called for European member states to make it compulsory for national systems to be dismantled after the European safety system ERTMS has been installed. He believes that the European Commission can ensure that this happens through legally binding agreements.

According to the Court of Auditors, the implementation of the ERTMS was a strategic political choice at that time, and was started without an assessment of the total costs, or adequate planning. “The result is that many infrastructure managers and rail operators are hesitant to invest in the system because of a lack of individual business cases.”

This is true, among other places, in Germany, where it is said that the current safety system is still more than adequate. Therefore the European Court of Auditors has ordered the European Commission to formulate a tailored, conclusive business case for every member state, which aligns with the needs and requirements of each specific country.

In his presentation in Milan, consultant Peter Zijdemans from Ricardo Rail concurred with a number of observations in the European Court of Auditors’ report. The expert worked for twenty years for Thalys and was involved in the roll-out of the ERTMS on the HSL-Zuid (High-Speed Line South).

“In 2005 it was decided to equip trains on the HSL with ERTMS. The Dutch part of the HSL-Zuid and the Belgian high speed lines L3 and L4 would be equipped with ERTMS Levels 1 and 2 only. One of the reasons for this was the multitude of safety systems on the track such as the Dutch ATB, the Belgian TBL1 and the French TVM.

Furthermore, the rail expert agreed with the opinion of the European Court of Auditors that there is still a lack of compatibility, and named several examples of this. In 2009, the high-speed line between Belgium and the Netherlands was opened, equipped with the ERTMS system. Later, ERTMS was installed on the track section Amsterdam-Utrecht. When this track section came into use, it turned out that the ERTMS system on the Thalys was not compatible with the version between Amsterdam and Utrecht.

As a result, the high-speed trains were temporarily diverted.   Another compatibility problem emerged at the border crossing between Zevenaar and Emmerich, where there was a switch between different systems. In 2016, the track infrastructure was converted from ATB to ERTMS and then from 1500V overhead cables to 25,000V. This created an ‘island’ for the international train ICE, which Ricardo Rail came up with a technical solution for. But Thalys trains can no longer use the track there.