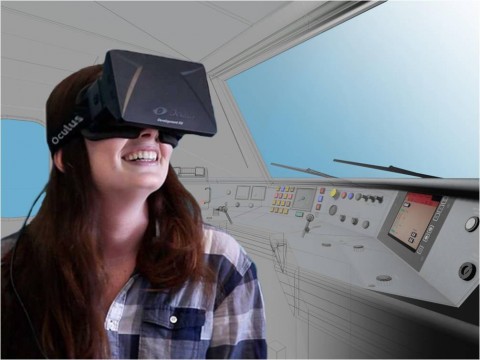 Nominees for the Rail-Tech award announced

The organisation of Rail-Tech 2015 has announced the ten nominations for the Innovation Award. The Innovation Award goes to a company with innovative ideas or solutions for the railway sector. The nominees will present their innovation at Wednesday 18 March in Utrecht, the Netherlands. Later that day there will be an award ceremony.

Alom and HTM  have found a solution, by modifying the current anchoring system. They are now able to reuse both the anchoring system and the lower concrete layer. Besides the specially modified anchoring system, the rail fastening system (ABC system) uses only standard products (such as baseplate, railpad and springclips). This is a big advantage.
Amberg Technologies – New Track Sprinter
The flexibility of only one trolley, a greater productivity and the persistent high accuracy during track measurement reduce costs, enable efficient track maintenance surveys and thus contribute significantly to the quality and safety of railway lines.

The revolutionary IMU technology replaces the tachymeter for measuring track geometry. In this way no tachymeter on tripod or on a second trolley is required any more. As a result the number of workers on track is reduced, safety increased and the higher operational flexibility results automatically in a higher output. The notorious ”line of sight demand” is vanished into thin air. This makes the Amberg IMS system a unique “Track Sprinter”.

The driver assistance system helps the driver to evaluate and react appropriately to critical situations. A very precise near field monitoring system using stereo camera technology filters the vehicle envelope upfront of the vehicle for obstacles and warns the driver accordingly.

By utilizing our robust network architecture with its own dedicated servers with a redundant design is the Dual Inventive App an App that digitizes an entire project process. This makes it possible to link data 24/7 to the project through MTinfo 3000 which can be accessed by “Safe Systems of Work Planners” via a secured Network. Users of the app can easily share location-related information with each other, for example by sharing a photo or comment. This data can be linked to all the relevant people working on the project and stored. The planner can also use his computer to keep in touch with the staff/LWB in the field through the App.

Through the secured environment that is available 24/7 and physically links projects by means of authorization, signing in and out on a project with your Digital Safety Passport is very simple.

The new Railstraights from Elektro-Thermit GmbH & Co. KG offer the perfect solution to check the straightness of rails. This can be for new rails or maintenance where the straightness of the welded joints, insulated or fishplate joints is checked. In the course of maintenance the formation of corrugations can also be analyzed before or after grinding work.

As well as the highly precise electronic measurement, the devices also impress with their easy handling and innovative control via an app.

GeoNext has developed a 3D-video measuring system for rail. GeoNext was inspired by the process industry, where accurate measurements are conducted with a high frequency. However, the sensors used for this purpose are installed in static-mode and they are not designed to measure distances. GeoNext took these sensors, combined it with geodetic equipment and mounted it on a trolley. The company developed software for measurements and processing data. The result is a 3D-video measuring system.

Movares is developing a full-scale virtual train simulator that will train drivers in a virtual environment. Existing train simulators used for driver training have a number of disadvantages. Training scenarios have to be built manually, and it is virtually impossible to link existing simulators to other systems. And the virtual environment looks very dated, creating an excessive disconnect with reality. The Full-Scale Virtual Train Simulator offers a solution.

NS Reizigers and Rail Road Systems have jointly developed a system to manage the autumn leaf fall slipperiness when braking and acceleration of trains at railway stations.  A NS machinist has devised that a layer of water on the track can prevent autumn slipperiness. Rail Road Systems has developed a system to get the layer of water on the track.   Despite various measures ensures slipperiness by autumn leaf fall for nuisance and train delays each year. Leaves are taken by the wheels of the train on the head of the track. This creates a black composting on the rail. This black coat is slippery and difficult for braking and acceleration of the train.   The wetting of the track with water can prevent the adhesion of the autumn leafs on the rail.

Railway embankments and dikes are often undermined by wild. Think of foxes, rabbits or badgers. Dens and burrows into the embankments and dykes of railroad tracks make it unstable. Subsidence in the dike are undesirable and lead to unsafe situations. Around slopes of embankments and railways to places only columns with Tupoleum does not give the desired effect that all animals will disappear.

Unlike administrative systems for recording route knowledge, the Ritco route knowledge software application builds on the demonstrable actual presence of a driver on a certain route section, recorded by a location based mobile application.

Through a gps track, generated by the Ritco mobile App, the presence of a train driver on a certain route is demonstrable on both place and time as well as in driving direction. The gps tracks are logged enriched with a unique driver username-password combination and tagged with additional information added to the gps data string by the driver.