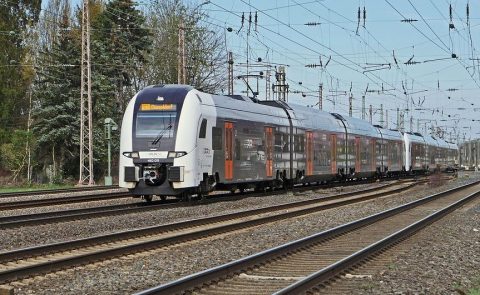 Rail transport is coming to terms with some of the post-pandemic realities, such as different travel patterns. This has had an impact on railway policy in many countries, with state intervention seemingly on the rise.

The new state meddling is inspired by the belief that only governments can rebuild societies after an economic disaster like the one of the past two years. This is some truth in that, as recent have exposed the weakness of the market in many areas. Governments have even had to subsidise hairdressers and bakers.

The same was true for public transport, where the passenger number in 2020 were disastrous. In the US for example, figures in the second quarter of 2020 fell to a quarter of what they had been in the same period in 2019.

Timetables and train services that were set up to shuttle people in and out of downtown areas must now be adjusted to more irregular travel patterns. Many people are still working from home, although this seems limited to the so-called white-collar workers.

In London, services designed to carry white-collar workers into city centres, such as the London Underground and commuter railway lines, are significantly less frequented, while buses are busier because they are used by students, shoppers and blue-collar workers who cannot avoid travelling.

Some of these groups contribute much less to vitality and and the economic recovery in the city centre. This has prompted more and more public authorities to intervene.

Although travel is likely to recover a little further, a return to the pre-pandemic pattern seems implausible, according many operators. Clearly, the change in behaviour is caused by a fundamental resetting of commuting habits. In London, Paris and New York, we can see that more people now use public transport for leisure than for work. This has an impact on the structure of the various tariffs set up by the operators, who receive less revenue and more irregularly.

The decline in ridership means that the figures studied before 2020 need to be revised. And this can sometimes have an impact on certain projects. Transport Scotland announced for example that it was scrapping a plan to double the number of tracks around East Kilbride railway station, which would have allowed more commuters to reach Glasgow during rush hour. The revised business case explain that the link between job growth and transport use has been broken.

In Spain, the operator iryo (ILSA/Trenitalia), which has not yet started operations, has succeeded in modifying its contract with the infrastructure manager Adif twice, because the 2019 figures no longer correspond to today’s post-pandemic reality. The operator will now be allowed to run fewer trains than planned.

Of course, companies that operate at their own risk will not be nationalised but will still have to take into account the new post-pandemic realities.

Back to the state-ownership

In the wake of the post-pandemic situation, the idea is returning that public ownership could improve things in regional train services. This idea is especially prevalent in Britain.

As the state becomes more involved in railway and public transport business, it is becoming increasingly clear that the focus is less on passengers and more on the politics and public finances behind it.

No one can predict today whether this return to public ownership is really in the interests of decarbonising transport and in the interests of passengers. This may mean, for example, that some stations will not be renovated and that the delivery of rolling stock will be spread over several years.

Two months after the nationalisation of trains in Scotland last April, almost 100 trains per workday were subsequently removed from the timetable. In the meantime, the ratio of subsidy to passenger revenue in Scotland has gone from a 50:50 balance to more like more like 70:30.

The 9-euro ticket in Germany is another example: it was intended to show that a gesture was being made to citizens, but it caught the regional operators off guard, who had asked for additional resources to cope with the expected flows and changes to ticket machines. According some operators, little support was received.

It is therefore with great curiosity that we will see how regional railways will be operated in the future, especially in countries that used to have third-party contracts, such as Germany, Sweden or Great Britain.

“A new era”, yes, but as at other modes to be embraced by a dynamic, a sound, Industry of railways! (Nations, taxpayers…, shall be owners, yes, but with due bordering towards industry, etc.!)
Regardless if frustrated, Kanslers, etc. have to stay out!… (An elephant in porcelain shop is not good, for any one…)

Capitalising and leasing back new train fleets has been the only real success of private finance in Britain’s railway. Nearly all infrastructure since the 90s has been taxpayer-funded or gilts-backed. Fares in Britain are among the highest per-mile in the world, with little to show the price increases are justified. Nor has privatisation delivered the competitive environment that the original policy envisaged. Nothing suggests the private sector is prepared to decarbonise transport alone.