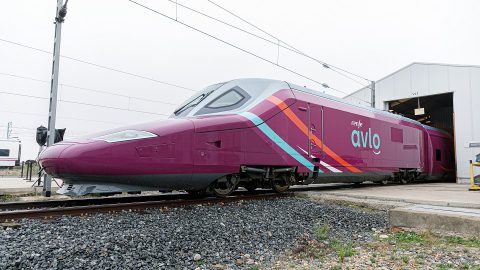 Spanish railway company Renfe will introduce low-cost high-speed trains starting from 6 April 2020. With a new service branded as Avlo, the passengers will be able to travel on the Madrid – Zaragoza – Barcelona route for 10 euros. Eventually, this option could be extended to other high-speed corridors.

The name of the service is formed by merging two words – AVE (Renfe’s brand for conventional high-speed trains) and low-cost. Renfe will start ticket sales for Avlo trains in late January 2020. A single three-hour journey will cost from 10 to 60 euros compared to a price range from 41 to 152 euros provided at the conventional high-speed trains branded as AVE. Children under 14 years will be able to travel between Madrid and Barcelona for 5 euros.

At the start, the Avlo trains will run between Sants station in Barcelona and Atocha station in Madrid two times daily. By the end of 2020, Renfe plans to increase the frequency up to five times daily. With the help of new service, the Spanish railway operator will contribute to the fight against climate change. The company intends to attract an additional one million passengers in the first two years by taking them from other modes of transportation. Currently, approximately 10 million passengers travel better Madrid and Barcelona every year: four million take the trains, four million choose highways and two million prefer planes.

Avlo trains will be painted in their own pink livery with a few red, white and turquoise lines. In contrast, conventional AVE high-speed trains are coloured in white livery with some lines. For the low-cost high-speed service, Renfe will use Class 112 trains also known as Talgo 350. They will be retrofitted at the company’s workshops in Madrid, La Sagra, Málaga and Valladolid in order to increase capacity by 20 per cent – up to 438 seats per trainset. Afterwards, the company plans to introduce a new type of rolling stock for Avlo links – Class 106 high-speed trains with a seating capacity for 581 passengers per trainset.

At the present moment, the low-cost high-speed train service is offered by French railway company SNCF. It has two separate brands – Ouigo for links within France and IZY for connections between Brussels and Paris. The latter is provided by Thalys, a joint venture of SNCF and NMBS/SNCB. These low-cost services also include minimal tickets for 10 euros.

Both use the business model of popular European low-cost airlines such as Ryanair and EasyJet. Inter alia, it consists of solely online or app ticket sales, restrictions for carrying luggage, use of high-capacity trains with fewer members of staff. The IZY trains run a little bit slower compared to TGV trains because they use the other route but save money on track access charges. Meanwhile, the Ouigo vehicles depart from non-major railway stations.