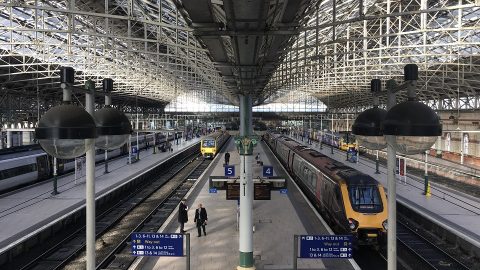 Train a better mode to travel UK than plane

Travelling by train from London to Glasgow, one passenger could reduce CO2 emissions by almost 60 per cent compared to flying. In case of a journey to Manchester, this volume could be shortened even more – by 73 per cent. Taking into account security issues at the airports and complicated voyages to them from the city cores, railways provide much more comfortable trips across the United Kingdom.

The difference in generating emissions by planes and trains is significant. For journeys from London to Aberdeen, Edinburgh, Glasgow, it exceeds twofold volume. Meanwhile, for trips from London to Newcastle and Manchester, this index approaches to threefold and fourfold figure respectively. The results were published by LeaseFetcher, a UK-based car leasing comparison website. It has investigated and compared several modes of transport using for domestic journeys between London and five major cities in the UK.

The calculations were based on the flight schedule in the period from the 4th to the 10th of November, 2019. “There were 656 flights to London from the five UK airports with the most flights to the British capital: Glasgow, Edinburgh, Newcastle, Manchester and Aberdeen. That’s nearly 4,416 tonnes of CO2 emissions in one week, for one-way flights to London. To ​offset ​this, you would need to plant 73,016 tree seedlings and wait 10 years,” LeaseFetcher concludes.

“As for international travel, alternative travel options are limited at the present time. For domestic travel, you’ve got options that are as almost as easy, cheap and only marginally longer than the compared short-haul flight,” the report says. Therefore, most of the domestic flights to the above-mentioned cities could be replaced with trains. This should be done not only due to the emissions but for passenger comfort. In some cases, a flight is almost equal to a train journey especially given the time for all security issues.

According to LeaseFetcher, there are 45 flights each week from Manchester to London Heathrow. They take only 55 minutes. At the same time, a train runs from Manchester to London Euston for on average 2 hours and 6 minutes. The very similar situation is in the case of journeying to Newcastle: 1 hour and 10 minutes by plane and 2 hours and 52 minutes by train. “But when you allow for getting into the airport, pass security and actually boarding the plane this could easily take upwards of 2 hours – especially if you’re travelling at peak time,” the report states.

It is worth to add that airports usually recommend passengers to arrive at least one hour and a half early for a domestic flight. Taking into account this time, a journey to an airport that could also take the same time and many other factors, travelling by train and plane even from London to Edinburgh and Glasgow seem not so different as at the first glance. Just for information, usually a voyage by rail and air to these cities takes 1 hour and 10 minutes by plane compared to 4 hours and around half by train. The only exception is Aberdeen. This direction has much higher ratio: 1 hour and 20 minutes to 7 hours and 18 minutes. “Trains do take longer, but do you really enjoy waiting in a queue for security only to frantically empty your hand luggage and enjoy a complimentary pat down?,” LeaseFetcher asks in its report.

Despite their advantages in comparison to planes, trains have another competing mode of transport. It is the electric cars that emit less CO2 than trains. In comparison with plug-in hybrid electric vehicles (PHEV), trains generate almost the same quantity of emissions (10.6 to 9.2 kilogrammes of CO2 per passenger for Manchester trip) or exceed it only in 1.3 times (31.8 to 24.5 kilogrammes of CO2 per passenger for Aberdeen trip) and 1.4 times (for Edinburgh, Glasgow, Newcastle trips). But this ratio is much higher between trains and battery electric vehicles (BEV): from 2.2 times for Manchester journey to 2.5 times for Aberdeen travel and 2.7 times for voyages to Edinburgh, Glasgow and Newcastle.

This means that electric vehicles could be also an alternative to planes and compete with trains. Therefore, railways should think about further reducing CO2 emissions to become more competitive. Notwithstanding the differences between trains and electric vehicles, LeaseFetcher advises passengers to use trains and cars for domestic travels. “When travelling within the UK, choose rail and carpool than air,” the report sums up.

I advise avoiding the new high velocity “bullet” trains. Their tickets are much more expensive, and they have non-reclining airplane seating, with no compartments or sleeper wagons.

High speed train stations look like airports, with metal detectors, X-rays booths, restrictions, and armed security. For example you’re not allowed to see friends & relatives off on the platform, or greet them as they come to a rolling stop, like you can with conventional trains. Nor do the train windows open