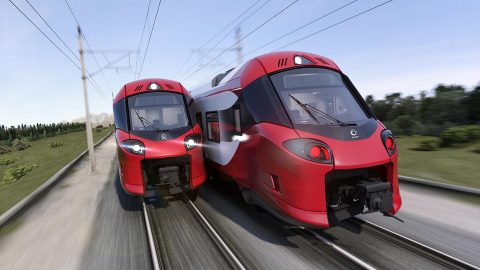 French technology company Alstom has received orders for 12.107 billion Euros in 2018/2019 fiscal year. The growth was around 69 per cent compared to the previous accounting period. Half of the amount was secured by the rolling stock bookings.

Alstom reported on its financial results in 2018/2019 fiscal year (between 1 April 2018 and 31 March 2019). The technology group sold products and services for 8.072 billion Euros showing an increase of 10 per cent. The adjusted EBIT was 570 million Euros that is 44 per cent higher than the last year figures. The net income of the Alstom Group was almost doubled by reaching the amount of 681 million Euros. Alstom also secured a new record-breaking backlog of 40.5 billion Euros.

The rolling stock continues to remain its key role in Alstom business. This kind of products provided half of the orders and 43 per cent of sales in 2018/2019 fiscal year. The remaining orders were divided by three other products: services – 26 per cent, signalling – 13 per cent and systems – 11 per cent. The sales breakdown looks a little different: 22 per cent – systems, 19 per cent – services and 16 per cent – signalling.

The successful financial results of Alstom is based on its 2020 strategy. It consists of five pillars:

“Alstom benefited from an exceptional commercial momentum this year with a record level of order intake at 12 billion Euros, including two major contracts with the renewal of the very high-speed train fleet in France and the metro system project for Montreal. The very strong sales growth and the further margin enhancement confirm the success of our 2020 strategy, which is now completed,” said Henri Poupart-Lafarge, CEO of Alstom.