Surge of international freight traffic in the Netherlands

In 2017, more than 41 million tonnes of goods in total were transported by rail from, to and within the Netherlands. Over 93 per cent of this volume was loaded and/or unloaded abroad. This means that the share of international transport has increased further. Statistics Netherlands (CBS) reports this based on newly released figures.

The increase in rail transport is caused by higher volumes of both transit and inbound freight of foreign origin. Transit goods are transported by rail within the Netherlands but have their place of loading and unloading abroad. The share of transit trade doubled from 4 per cent in 2007 to 8 per cent in 2017. In the same period, the share of inbound transport went up from 22 to 25 per cent. The total volume of goods transported from the Netherlands to other countries has hardly changed; from 24.7 million tonnes in 2007 to 24.9 million tonnes last year.

The largest trading partner in terms of both inbound and outbound rail freight transport is Germany. Over 74 per cent of outgoing freight is destined for Germany and 49 per cent of incoming goods are loaded there. This share has also increased over the past decade. Italy, Belgium, Austria and Poland follow at a great distance. Poland has become increasingly important with regard to inbound rail freight transport; the share of goods loaded in this country rose from over 1 per cent in 2007 to 6 per cent in 2017. There are mainly incoming shipments of container goods and grain from Poland. 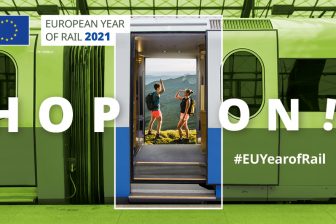 ‘EU Year of Rail not extended, but one year definitely not enough’