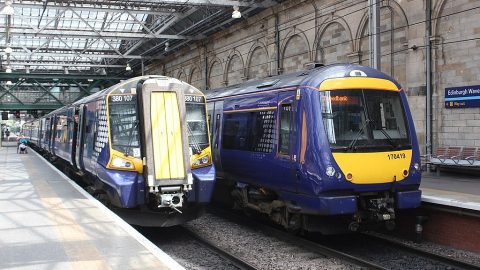 1 April 2022 marks the day that the Scottish Government has taken full public ownership of the network in the north of the UK. A new public agency is responsible for all passenger operations that begin and terminate within Scotland.

Overnight, freight operators have become the vanguard of private rail operations in Scotland. Passenger services, branded ScotRail, have moved from management by Dutch operator Abellio to a new government owned body, ScotRail Trains. That operation will be overseen by another new government body, Scottish Rail Holdings. It is 25 years to the day since the railway in Scotland was privatised.

In March last year, the Scottish government announced that they would take the rail operations back in public ownership after criticism about the operation on the network. The government already has a working arrangement with the national infrastructure agency Network Rail. Only some cross-border passenger services and freight operations remain under outside management.

Obviously the concentration today has been on passenger services, and in particular the calls for the ramping up of services that were cut or reduced during the past two years, such as increasing the frequency of services between Glasgow and Edinburgh which, on some routes, are running at half the level they were before the pandemic. All the major freight operators have interests in Scotland, and the early indications are that their position will not be adversely affected.

“Scottish Rail Holdings is an organisation controlled by Scottish Ministers that has been set up with the express purpose of overseeing the governance of train operating companies”, says a government statement. “We act as the ‘owning group’ of the operating company and provide separation between Transport Scotland as strategic policymakers and the direct management of train service delivery for ScotRail Trains (SRT).”

Mentioned in that statement, Transport Scotland will remain as the arm of policy in Scotland, and is responsible for overseeing projects like the Levenmouth branch, currently under construction. Some have said that the management structure is now considerably more cumbersome, while the government assures stakeholders that the set up will offer a world-class service and drive socio-economic benefit across the wider Scottish economy.

However, freight remains outside the direct management of the government in Edinburgh, and most services run cross-border. Relations between the rail freight operators and the government remain largely cordial, and it should be noted that the new governance occupies the same premises as before and most of the management team will already be familiar faces.