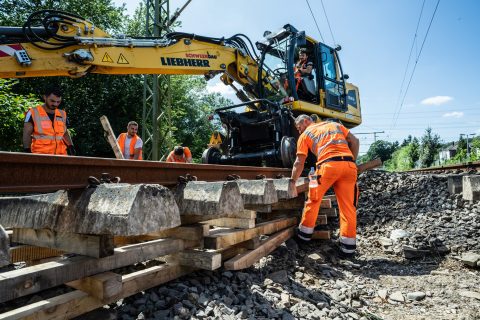 According to DB Netz the repairs of the German railways after the recent flooding will cost at least 1.3 billion euros. After an initial estimate, the railway manager speaks of a repair job of ‘unprecedented proportions’, and warns that some repair work can take years.

In Germany, about 50 bridges, 40 signal boxes and 180 level crossings will have to be repaired, not to mention the damage to the overhead wires and the stations. “Our infrastructure has never been destroyed in one fell swoop on this scale”, said DB Netz board member Volker Hentschel. The damage mainly occurred in North Rhine-Westphalia and Rhineland-Palatinate.

According to Hentschel, Deutsche Bahn is working hard to get as many routes back up and running as quickly as possible. Priority is given to the busiest routes. In the first phase of the repair work, jobs were mainly carried out on the lines where the damage was minimal. Elsewhere, work has been done on the overhead wires and debris has been cleared.

According to Deutsche Bahn, 80 per cent of the work should be completed before the end of the year. However, some repairs may take years to complete. To this end, DB will focus on close cooperation with the local authorities, the federal states and the federal government.

The repairs will also be used to make improvements to the infrastructure, be it overhead lines, signal masts, level crossings or stations, Hentschel said.

Because the extreme weather will become more frequent in the future, DB is developing a so-called resilience strategy. A study into weather forecasts for traffic by the Potsdam Institute for Climate Impact Research that the railway company had carried out for this purpose will serve as the basis for this.