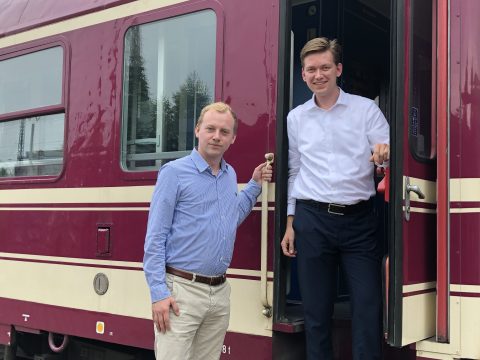 Under the name GreenCityTrip, a new sleeper train will run twice a week starting 15 October 2021 from the Netherlands to popular destinations such as Prague, Vienna, Venice, Innsbruck, Verona and Milan. The initiator is travel organisation Flywise from Breda, which originally organised trips by airplane.

GreenCityTrip does not have its own trains, but has called in Train Charter Services from the Dutch city Den Bosch for this purpose. “We are not a rail carrier and have no experience at all with train travel”, explains co-owner Hessel Winkelman. “Before corona broke out, we only organised cheap city trips by plane. In order to be able to do something positive in those negative times, we came up with city trips by sleeper train.” Winkelman and his partner Maarten Bastian worked on their idea for a year and a half.

“Compared to arranging a charter plane, a train takes a lot more time because of the train paths that had to be requested in the different countries and the rolling stock, but luckily we were able to outsource that to specialists. Now that all the systems have been set up, the agreements with hotels have been made and we have arranged the trains, we thought the time was right to go public.”

The trains that GreenCitytrip will use are sixteen German sleeping cars with 700 beds, which will remain at their destination until the return journey begins. “In this way we offer the certainty that people will return home in any case.” The trips are all sold as a package including two nights in a hotel. Travellers can choose from three different classes, where coupes for two to six people can be booked from 199 euros per person.

According to GreenCityTrip, the demand for a sustainable alternative to air travel is high and corona has further fueled interest in sleeper trains. Especially when it comes to destinations that are easily accessible by train. Travellers can depart in the evening from Breda, Rotterdam, The Hague, Amsterdam, Utrecht or Arnhem and arrive at their destination in the heart of the city the next morning. “Without the queues at airports, and you have ‘spared’ the environment while sleeping, saving 700 kilograms of CO2 compared to air travel.”

GreenCitytrip is one of the many new night train initiatives that have been presented in recent months. From next year the start-ups European Sleeper and Midnight Trains expect to be able to run their first night trains. In May, Dutch Railways NS, in collaboration with the Austrian carrier ÖBB, started a night train to Vienna. A similar train could follow to Zurich later this year.