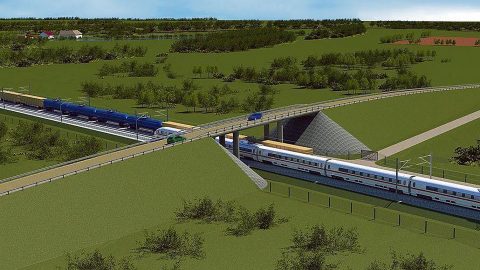 RB Rail joint venture has selected the contractors to design and supervise the final section of the Rail Baltica project in Estonia. This task will be performed by the consortium of OBERMEYER Planen + Beraten from Germany and PROINTEC from Spain. The agreement is valued at around 10.8 million euros.

The German-Spanish consortium will design the section of Rail Baltica between Pärnu and the Latvian border in the southwestern part of mainland Estonia. This line will have 93.5 kilometres long. According to the preliminary design, there will be constructed 9 railway bridges, 15 road viaducts, 7 railway viaducts and 11 ecoducts (for animals).

The contract between RB Rail and the chosen consortium consists of the geotechnical investigations, value engineering, preparation of the master design and detailed technical design for construction of the railway track substructure, superstructure and related civil structures. OBERMEYER Planen + Beraten and PROINTEC are committed to fulfilling these works within the 27-month period. Both companies have long-term experience in providing the planning, engineering and consulting services.

Other sections in Estonia

The section between Pärnu and the Latvian border is the final stretch of the planned Rail Baltica project in Estonia. “We have reached yet another important milestone in Estonia. Once the contract is signed in the upcoming weeks, all 213 kilometres of the Rail Baltica line in Estonia will be in the design process,” said Agnis Driksna, interim CEO of RB Rail joint venture.

The contractor for two other sections had been chosen earlier. It is Spanish engineering company Idom that will design the Tallinn – Rapla (48 kilometres) and Rapla – Pärnu lines (71 kilometres). It is worth to add that the design works for the Rail Baltica project in Estonia are funded by the European Union (85 per cent) and Estonia itself (15 per cent).