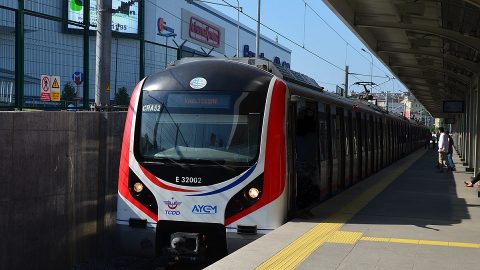 Turkey has inaugurated the second phase of the Marmaray railway line that connects Europe and Asia. The official ceremony was held on 12 March. The regular commuter service on the 76.6-kilometre route between the Halkalı and Gebze termini on the European and Asian sides respectively starts to run on Wednesday, 13 March.

The Halkalı-Gebze commuter route includes 43 stations, 14 of them are located in the European part of Istanbul, the remaining ones lies on the Asian side. The line also maintains the 14-kilometre railway tunnel under the Bosphorus Strait opened in 2013. The travel time between the termini takes 1 hour 55 minutes. The Marmaray line will combine commuter, intercity and freight service. In addition, it is connected with other modes of transportation including metro, tram, bus rapid transit.

The line will carry more than 75,000 passengers per hour and 1.7 million passengers per day. “In other words, this suburban rail line will carry passengers that would normally require 100,000 vehicles,” President Erdoğan said to local media. The route will be served by 34 ten-car and 20 five-car trainsets of the TCDD E32000 type. They were constructed by South Korean manufacturer Hyundai Rotem in cooperation with local producer TÜVASAŞ.

The signalling and control equipment for the Marmaray route was delivered by Siemens Mobility. The German supplier has installed and commissioned the Signalling and Control system, the Communication systems as well as the SCADA system. The line was also equipped with both ERTMS (European Railway Traffic Management System) and CBTC (Communication Based Train Control System) systems.

The first phase of the Marmaray project was launched in October 2013. Initially, the railway tunnel under the Bosphorus Strait was opened. Afterwards, the Kazlıçeşne-Ayrılık Çeşmesi section of the line started to serve regular passenger trains. The first phase includes only five stations located close to the tunnel. They provide a good connection to metro trains and trams.