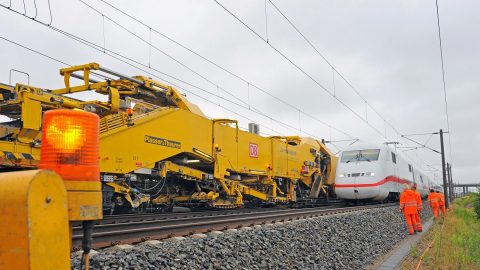 Deutsche Bahn (DB) continues to invest in upgrading the German railway infrastructure. The company intends to allocate 10.7 billion Euros for the construction and renovating projects. The infrastructure upgrading includes modernisation of around 1,500 kilometres of tracks, over 300 bridges and 650 stations this year.

The German national railway company has started an extensive programme to modernise the infrastructure in 2010. Since then, DB has already upgraded 16,000 kilometres of tracks. “We are on the right way. The investments in the railway network have an impact,” DB Board Member for Infrastructure Ronald Pofalla noted. The company succeeded to improve the train punctuality despite the intensive construction works. DB enhanced the scheduled departure of the long-distance trains by 21 per cent.

DB is regarding the modernisation of railway infrastructure as an important way to reduce bottlenecks. The company has set more passenger and freight trains on the network. This number has increased by over 50 per cent since 1994. In order to minimise delays during construction works, the company tries to carry out more activities at night.