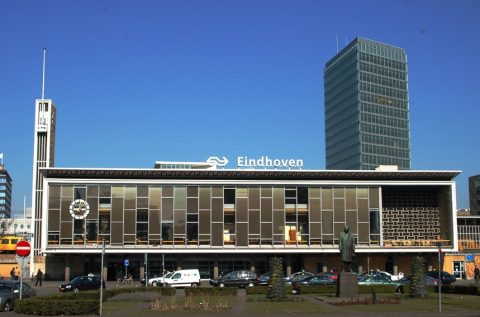 Linking the intercity connection between the Dutch cities Eindhoven and Venlo and the German Regional Express to Düsseldorf has the most potential in connecting Eindhoven with Düsseldorf. This direct intercity connection, with one train per hour, can start in 2025. As a result, the current journey time will be reduced by almost 15 minutes and there will be an extra 250,000 train passengers per year, according to a study by the Ministry of Infrastructure and Water Management and the provinces of Noord-Brabant and Limburg.

The ultimate goal is to speed up the service once the track between Dülken and Kaldenkirchen is complete. This track starts just over the German border near the Dutch city of Venlo, and goes to the outskirts of Düsseldorf. All told, this will lower the journey time by 20 minutes, and a further 50,000 passengers will use the line annually, so a total of 300,000 passengers will travel on this intercity every year. However, it is not known when this can be realised.

For the new intercity connection, the current intercity service between Utrecht and Venlo will be ‘chopped’ at Eindhoven Station once an hour. In other words: this intercity train will not go further than Eindhoven. This is not good news for domestic travellers, but ‘the negative effect is smaller than the positive effect that will be achieved with the international train’.

After Eindhoven, the international train will only stop at Helmond and Venlo. To compensate for the loss of this train service, the sprinter will go on an extended route once an hour. This train must turn around at Eindhoven, but because of the High-Frequent Track Programme there is no space for this, so the infrastructure around Eindhoven Station will be changed.

In January 2016, then Mayor of Eindhoven Rob van Gijzel and Mayor of Düsseldorf Thomas Geisel stated their desire to connect the train connection between the two cities to the HSL-Zuid. For the time being at least, this is not going to happen. The train service will not be extended to The Hague and Rotterdam as it is too expensive. In any case, there could be problems with the availability of rolling stock for such a connection, as the train would go on the HSL-Zuid line for part of the journey.

The study to find a preferred alternative for the direct connection between Eindhoven and Düsseldorf began in February 2016. The starting points were, among other things, that there must be an improvement on the current situation, for example a shorter journey time, and that the service can start between 2025 and 2030.

The Dutch Ministry of Infrastructure and Water Management and Germany’s Verkehrsverbund Rhein Ruhr (VRR) are going to sign a declaration of intention. After this, concrete agreements will be made, including about how the costs will be shared. These will then be set down in a partnership agreement.

This new train service is part of the EurekaRail project. In this project, the provinces of Limburg and Noord-Brabant and the Ministry of Infrastructure and Water Management are working on improving the cross-border train connections with Germany and Belgium. The ultimate aim is a direct intercity connection between Eindhoven, Heerlen, Aachen and Cologne, and a direct train connection in the triangle Liege-Maastricht-Heerlen-Aachen.