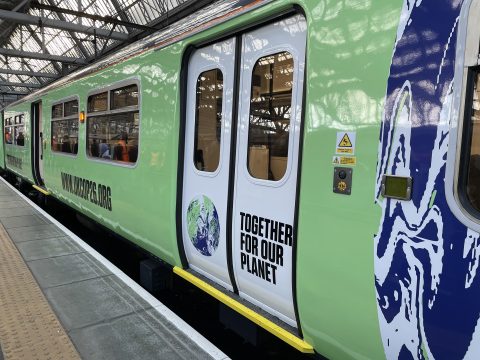 HydroFLEX train shows up at COP26, but without hydrogen

The tri-mode HydroFLEX train, which can run on hydrogen, electricity and battery power, is making an appearance at the UN climate conference in Glasgow. No hydrogen is on board for the event however, and is there enough green hydrogen to deploy these kinds of trains?

Developed by leasing firm Porterbrook and the University of Birmingham, the HydroFLEX train is a 30-year old electric train where a hydrogen fuel system has been installed within 10 months. In the HydroChamber, there are 36 high-pressure tanks which can store up to 277 kilograms of hydrogen, enough for over 300 miles of green powered operation.

No hydrogen on board at COP26

The Climate Conference COP26 is not only the biggest event ever hosted in Scotland, but also a brilliant opportunity to showcase the green potential of rail, as Alex Heynes, Managing Director Scotland’s Railway, puts it. A new battery train also made its first journey during the conference, and now the world’s first tri-mode train makes an appearance.

The HydroFLEX can of course run on hydrogen, but during COP26, it runs on electricity. The reason for that is that Porterbrook wants to let visitors take a look inside the train’s hydrogen chamber, which would not be allowed due to safety rules when there was hydrogen stored on board.

Bill Reeves, Director of rail at Transport Scotland: “Railways are already a green transport mode, and we’re going to make it completely green by 2035 in Scotland. They can further decarbonise the wider transport system. Fuel cells are a part of that, and HydroFLEX shows how that can be used in the railway system.”

Not much green hydrogen production

There are challenges around running HydroFLEX trains on the UK network, said Helen Simpson, Porterbrook’s innovation projects director, to iNews. One of these is that the goal is that they run on green hydrogen, which is not widely produced across the UK. Green hydrogen is generated by renewable energy, while hydrogen can also be produced with for example gas, meaning it is not fossil-free.

So as Scotland wants run hydrogen trains on its network, why don’t they buy existing hydrogen trains, such as from Alstom? These will run on the German network, as well as in the Netherlands, for example. Mary Grant, the chief executive of Porterbrook, explained that the UK cannot purchase these types of trains because many tunnels in the UK are not tall enough to allow trains with hydrogen technology to pass through them.

She says that the challenge for the UK is to get hydrogen trains into the UK via other ways, of which retrofitting older trains as the HydroFLEX shows is possible, is one solution.