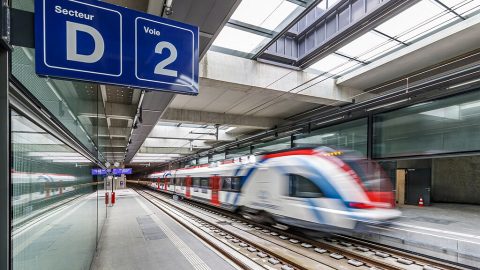 Swiss railway operators SBB, Thurbo and RegionAlps plan to purchase 194 new trains. They are dedicated to the replacement of the old fleet and improvement of S-Bahn links across the country, especially in the Zurich metropolitan area. The new vehicles will be entered service starting from December 2025.

SBB together with its subsidiaries Thurbo (a joint venture with the canton of Thurgau) and RegionAlps (a joint venture with the canton of Valais) have launched on Monday, 18 May, a multi-stage tendering process valued at 1.5 billion Swiss francs (more than 1.4 billion euros). Within the first stage, the contestants should offer a concept of the energy-efficient and climate-friendly vehicle that has already been tested in a European country. All the trains must be single-deck and approved for operations in Switzerland, Germany and Austria.

At the end of 2020, only a few of the manufacturers will be prequalified to participate in the second stage when the existing vehicle platform will be scrutinised to meet the requirements of service, infrastructure and timetable. The final supplier will be chosen only in 2022. According to the current plans, the first purchased trains will start to run on the regular lines starting from December 2025. The procurement is coordinated with the cantons concerned, which act as buyers in regional transport, and the Federal Office of Transport.

Taking into account the order breakdown, SBB will acquire 106 new trains, Thurbo – 70 units and RegionAlps – 18 units. These vehicles will mainly replace around 270 existing trains, which will have to be discarded by the end of 2035 due to their lifespan. In addition to the 194 mentioned units, the three railway companies could extend their order with an additional 100 trains.

SBB plans to introduce the new vehicles in two stages: from 2025 to 2035 and from 2037 to 2048. During the first stage, the newly purchased units will replace the old trains including some Flirt trains that were acquired before 2011. The second stage is mainly designed to improve and extend the company’s service. Thurbo and RegionAlps also intend to replace the old rolling stock such as the RBDe 4/4 or RABe 535 types and standardise their fleets.