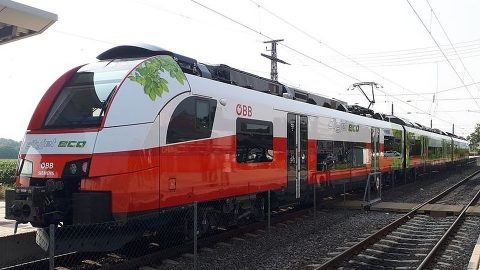 On 2 September Austrian Federal Railways (ÖBB) has started to test the prototype of the Cityjet eco train, the country’s first hybrid passenger multiple unit. It is capable to run using both the overhead electric wires and battery power. The rail vehicle is based on the Desiro train family developed by Siemens Mobility.

Cityjet is the brandname for the Siemens-made Desiro ML trains. They are running on the S-Bahn routes in Vienna and on the regional lines around Austria since 2015. The Cityjet eco train was converted from the retrofitted Desiro ML electric multiple unit. A battery system was installed on the roof of the train. It is charged on the electrified sections when the train powers from the overhead wires.

In 2010 ÖBB signed a framework agreement with Siemens Mobility for up to 200 Desiro ML units. After an extra order for 24 vehicles called this March, the number of the Desiro ML purchased by ÖBB has increased up to 189 units. The Cityjet trains are being supplied in two formations: the vehicles with 259 seats and 4 entrances per side serve the regional lines, while the vehicles with 244 seats and six entrances run on the S-Bahn routes, mostly in Vienna and its environs.