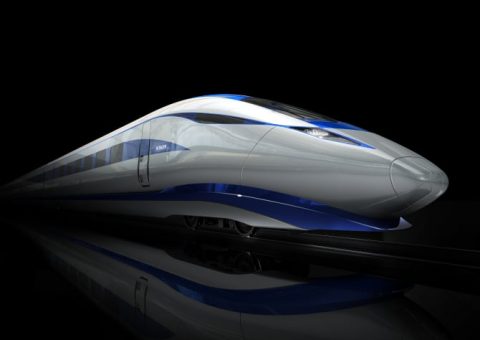 Bombardier and Hitachi have announced to submit a joint bid for building high-speed trains for the new British high-speed line HS2. The companies employ over 5,000 people in Britain. The new to build trains will have a maximum speed of 360 kilometres per hour. The contract is worth 3,12 billion Euros.

High Speed 2 (HS2) is a plan for a high-speed railway in the United Kingdom. It is going to run between London, Birmingham, the East Midlands, Leeds and Manchester. It is the second British high-speed railway and will become operational in phases from 2026 to 2033.

Bombardier and Hitachi expect that the joint bid will support the UK Government’s aims of boosting UK jobs, skills and British supply chain. Bombardier and Hitachi’s combined UK operations include train factories in Derby and Newton Aycliffe, extensive UK supply chains, together with a network of maintenance facilities across England, Scotland and Wales.

Bombardier already successfully delivered the Frecciarossa 1000 to Italy, one of Europe’s fastest trains. With a top speed of 398 kilometres, the ETR 1000 is known for its comfort and style. The train manufacturer has developed four TGV series in France, the AVE S-102 and AVE S-130 in Spain, the ICE family in Germany and the ETR 500 in Italy. Bombardier also built over 3,000 high-speed train carriages for China, including the most recent Zefiro 380.

Hitachi built the original Shinkansen bullet train in Japan in 1964. Bombardier offers a depth of experience having built. In the UK, Hitachi maintains the country’s only domestic high-speed fleet, the Class 395 Javelins, which it built and introduced ahead of the London 2012 Games. The trains, which have run from Ashford to London St Pancras at a top speed of 140 miles per hour for almost a decade

The 2.75 Pounds contract on offer is for a minimum fleet of 54 units that will run on Phase 1 of HS2 between London and the West Midlands. The newly designed rolling stock will also be uniquely ‘classic compatible’ so that they can travel on the current network to cities such as York, Newcastle, Liverpool, Glasgow and Edinburgh.

The formal tendering process is due to start later this year, with contract award in late 2019.