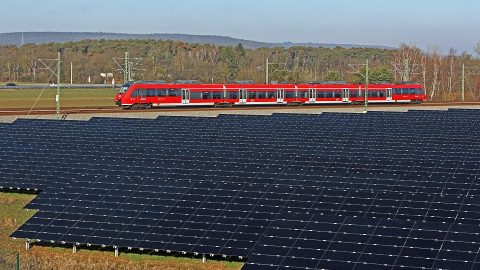 German national railway operator Deutsche Bahn is planning to achieve climate neutrality by 2050. To this end, it will totally convert its traction energy that will be generated from renewable sources. In terms of rolling stock, DB will phase out all the diesel trains and locomotives. They will be replaced with hydrogen and battery vehicles.

Deutsche Bahn (DB) has unveiled some strategic targets, which are in line with the European Green Deal. One of them is the full conversion of traction energy used to power electric trains from conventional electricity to that which is generated from the renewable sources.

This process will be carried gradually, in several phases. By 2030, the German railway undertaking intends to more than halve its CO2 emissions compared to 2006 and to increase the share of renewable energies in the traction current mix up to 80 per cent. The complete conversion will be finalised by 2038 when 100 per cent of traction energy will become green. “We, as Deutsche Bahn, want to be climate neutral by 2050,” DB highlighted.

No more diesel vehicles on tracks

Another substantial goal for Deutsche Bahn is to phase out all its diesel vehicles by 2050. “Railways will only become climate neutral if we say goodbye to diesel. We have to radically reduce fossil fuel consumption and bring it to zero. In 2050, DB will no longer drive a single vehicle with diesel. With an annual consumption of more than 250 million litres of diesel, this is a challenge – and we are tackling it,” said Sabina Jeschke, DB Board Member for Digitalisation and Technology.

In this regard, the railway company will scrutinise alternative fuels. First, it will examine climate-friendly eco-diesel that reduces CO2 emissions by 90 per cent. The Advanced TrainLab test train is already running by powering from eco-diesel. Starting from October, the eco-diesel train will perform scheduled services on the Sylt Shuttle line between Westerland and Niebüll in Schleswig-Holstein. Some preparations are also currently underway to use eco-diesel trains on a larger scale in regional transport in Baden-Württemberg. In addition, DB is planning to test hydrogen and battery-powered vehicles on its routes.

It is worth to note that there were the trials of the hydrogen-powered trains in Germany. They took place on the non-electrified Buxtehude – Bremerhaven – Cuxhaven line in Lower Saxony from September 2018 to February 2020 and were performed by Alstom and EVB, the local railway operator. To this end, Alstom delivered two Coradia iLint hydrogen trains.

The test operations were successful and EVB purchased 14 hydrogen vehicles of the mentioned type to be introduced on the scheduled services in 2021. Alstom also obtained one more order from another German regional undertaking. It was fahma, the railway operator in the Frankfurt Rhine-Main Metropolitan Area, that booked 27 Coradia iLint trains. They will be entered service in Frankfurt and its vicinities in 2022.

British Rail was still building steam engines in 1960 but following the 1955 modernization plan replaced most of them with diesel trains in 1962-66 with the last one in 1968,diesel trains will be banned in the UK in 20 years by 2040,more lines have been electrified in Germany than in the UK so Deutsche Bahn probably needs to replace less trains than British Rail did in the late 1950s and 60s and will be in Britain by 2040 so why will it take 30 years ? The target doesn’t seem ambitious enough.

I see the problem in the comparison of electricity and diesel costs. We could electrified 100 % of the network and ban the diesel engines on rail, but it would only lead to shift from rail to road. First we must solve the real problems of railways – reliability, capacity and other factors key for customers. Not spend money on electrification of useless local lines.