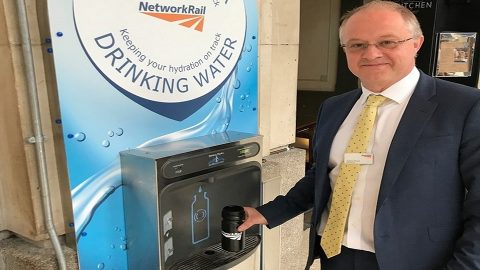 The ‘refill revolution’ provided by the British infrastructure manager Network Rail has set the first results in reducing the plastic pollution. It has allowed saving the equivalent of one million plastic bottles. The company aims to save two million water bottles by the end of the year.

Network Rail launched the ‘refill revolution’ in February 2018. It includes the installation of water fountains at the trains stations. Thanks to them, the passengers can fill their bottles for free instead of using the disposable plastic ones. “This is a great start and shows that passengers share our passion to reduce single-use plastic. I regularly use the water fountains when I’m on the go and I’m pleased to say we’re making it even easier for people using our stations to refill their bottles too,” said Andrew Haines, CEO of Network Rail. Moreover, the rail infrastructure manager promotes among the passengers to make the switch to reusable bottles.

According to Network Rail, over 100,000 bottles are being saved from landfill every month. The company accounted that this quantity is enough to fill 833 rubbish trucks or stretch the distance from London to Cardiff (235 kilometres). The figures of the non-consumpted bottles are based on the data of water fountains equipped a digital tracker to count the number of 0.5-litre bottles saved.

The action is provided together with City to Sea, a not-for-profit organisation campaigning for reducing the plastic consumption. It also organises a National Refill Day to take place on 19 June. Several activities are scheduled to be carried out at London Charing Cross, London Paddington, London Bridge and Birmingham New Street stations in order to popularise water fountains. Also, the passengers can install on their phones the Refill App developed by City to Sea. The application provides the information about over 21,000 refill terminals around the UK including the water fountains installed at the Network Rail’s train stations.