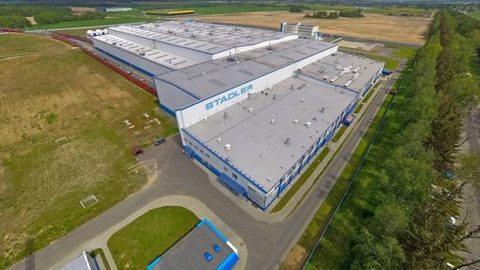 Stadler is developing its production facility in Belarus. Several workshops have been constructed last year while the others are building now. The Swiss company also intends to expand its product range by launching the manufacture of transducers for trams and trains.

The CEO of Stadler Peter Spuhler has discussed the launching of a new production line with Belarusian governmental officials during the visit to the country. He said that his company is interested in manufacturing of transducers at its Belarusian facility. The new product is expected to be supplied to the countries of Western Europe.

Spuhler noted that Stadler is working over the implementation of these plans. In November 2018, Stadler Minsk, the local subsidiary of the Swiss company, has signed a contract with Belarusian state-owned engineering company Belzarubezhstroy to build the production facility for manufacturing transducers. The works will take circa one year. The Stadler’s chairman did not specify the probable date to start the production of transducers.

Last year, Stadler has declared its plans to invest 35 million Euros in the development of the production facility in Belarus and to employ 280 additional workers. Two workshops, for machining and for welding, have been constructed in 2018. The machining facility is capable to produce 300 cars per year. Also, the painting workshop is building now. It will be completed by March.

The Stadler Minsk company was established in the Belarusian town of Fanipol in 2013. The Stadler’s subsidiary in Belarus started to manufacture trams and trains in 2014. It operates production facilities of 35,000 square metres. Currently, the company is manufacturing the trams for Bolivian city of Cochabamba and trains for Hungary and Norway.