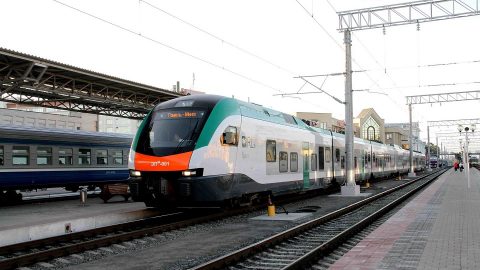 Belarusian Railway has concluded an agreement with Stadler’s local subsidiary for supplying 10 Flirt electric trains. The first five-car units will be delivered in late 2020. They will serve interregional lines connecting the capital of Minsk with regional centres.

The deal was signed on 18 January by Vladimir Balakhonov, the deputy chairman of the Belarusian Railway, and Philipp Brunner, the CEO of Stadler Minsk (Belarusian subsidiary of Stadler). It is the first stage in implementing the carrier’s strategy to upgrade its rolling stock. “Today’s event continues the development of a new format of passenger transportation, which Belarusian Railway began to realise in 2010 in order to create an integrated transportation system in Belarus”, said Vladimir Balakhonov. By 2025, Belarusian Railway intends to purchase another 20 electric trains as well as 20 diesel units.

The 93-metre trains will have a seating capacity for 260 passengers and will have a maximum speed of 160 kilometres per hour. The ordered units will provide two-class services. Each first-class zone will consist of 16 comfortable seats and will be separated by a glass partition.

The two-class zone will be composed according to the “3+2” seat scheme. The cars will be suitable for passengers with reduced mobility. All the information on control elements will be repeated in Braille. Moreover, the trains will be equipped with vending machines, Wi-Fi network, special places for bikes, prams and large baggage.

“This order strengthens our presence in the Belarusian market,”, noted CEO of Stadler Minsk Philipp Brunner. The Swiss manufacturer opened its facility in Fanipol, Minsk region, in November 2014. It produces rolling stock not only for Belarus but for Russia, Azerbaijan, Hungary, Slovenia and other countries.

At the same time, Belarusian Railway has operated Flirt trains since 2011. Currently, 18 Stadler units in different composition (from four to seven cars) serve the city lines in Minsk as well as the regional and interregional lines to the major cities of the country. Most of the Flirt trains running in Belarus were produced at Stadler’s facility in Siedlce, Poland.