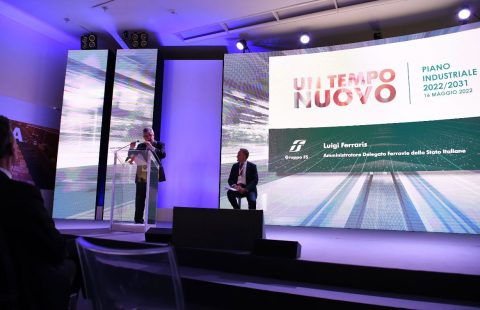 FS Italiane has set up a 2022-2031 Industrial Plan, supported by an investment plan worth over 190 billion euros. The plans were presented in Rome on Monday by the President of FS Italiane, Nicoletta Giadrossi and by FS Italiane Chief Executive Officer, Luigi Ferraris.

The organisational structure of FS Italiane will be restructured into four business branches, Infrastructure, Passengers, Logistics and Urban. About 40 thousand hires are expected over the course of the plan. Currently, more than 82 thousand people work for FS Italiane Group. Because there is a shortage of personnel in the Engineering and Construction sector, FS Italiane is working to review the recruiting and resource management policies and strengthen their collaborations with universities.

Infrastructure investments and introduction of ERTMS

Rail infrastructure manager RFI plans, overall, about 110 billion euros of investments in extraordinary maintenance, technologies, regional networks, ports and interports connections, routes of national interest (mainly high-speed ​​or high capacity), safety and adaptation, tourist lines, metropolitan cities and connections to airports. The budget also has the goal to reduce the gap between the north and south of the country.

The companies in the infrastructure branch will be Rete Ferroviaria Italiana, Anas, who is responsible for construction and maintenance of Italian motorways, consulting and project company Italferr and Ferrovie del Sud-Est, an operator in the Apulia region which network was taken over by FS in 2016 due to financial problems. The parent company of the sector will be RFI.

The completion of the interventions on site will be decisive for increasing the regularity of the service, with an extensive introduction of the digital signalling system ERTMS. The works will result in a reduction in travel times on the main railway routes. Turin-Genoa is to be reduced from 1 hour and 40 minutes to about 1 hour, Milan-Genoa from 1 hour and 30 minutes to 1 hour, for example. The largest reduction in travel time is to be won between Palermo and Catania , from 3 hours to 2 hours.

Furthermore, the construction of the Florence railway underpass will contribute to reducing travel times on the Turin-Salerno high-speed backbone and to a total separation of the high-speed ​​and regional flows in the Florence node. Also, increasingly extreme climatic events emphasise the importance of the issue of environmental sustainability and to increase the resilience of rail infrastructure to climate change, states FS Italiane.

The passenger rail branch of FS Italiane will invest around 15 billion by 2031. It’s parent company will be Trenitalia, with Busitalia, the operations of Ferrovie del Sud Est, with its rail and road offer in Salento, and Trenitalia Tper, which manages regional rail transport in Emilia-Romagna with the youngest fleet in Italy, which is 70 percent controlled by Trenitalia. Important for FS is to integrate mobility solutions, and increase the share of collective and shared transport.

The branch will have three subdivisions. First of all, one aimed at the market sector, for services without subsidies or other public contributions. This includes Trenitalia’s Frecciarossa high-speed trains, but also the first and last mile by bus, with the goal to better integrate different timetables.

There is another subdivision for the regulated sector, for passenger transport with Public Service Obligations (PSO), which are subsidised by the state, regions or municipalities. FS Italiane will focus on tourist development in the third subdivision, regarding both offering frequent and widespread connections for travellers as well as increasing ‘slow tourism’. FS will further increase historic trains on railways lines to discover the Italian landscape and culture.

The goal is to double the share of rail freight traffic from 2019 levels and reach the target by 2031. Italy’s share of rail in goods transport is ​​, low compared to the European average of 19-20 per cent. To reach the goal, investments for a total of almost 2.5 billion are planned. This includes the construction of new intermodal rail freight terminals. Furthermore, FS Group is working on new lines, such as the Terzo Valico dei Giovi: the terminal part south of the Reno-Alpi corridor that should transform the Genoa node into the main hub along the trade route from the Far East to Europe. This would shorten sea transport times by almost 5 days compared to North Sea ports such as Rotterdam and Antwerp.

The parent company of the logistics branch will be Mercitalia Logistics. Seven national and international operating companies are part of the branch, including Mercitalia Rail, the largest freight railway company in Italy, Tx Logistik and Mercitalia Intermodal, the largest combined road / rail transport operator in Italy.

The development of an international strategy for all FS Group companies expects an increase in revenues from 1.8 billion euros in 2019 to around 5 billion euros in 2031. Trenitalia and Busitalia are already present in various European countries. In France high-speed services between Milan and Paris were launched in December 2021, passing through Turin and Lyon and also enhanced with connections between Paris and Lyon. In Great Britain, FS is present with Trenitalia c2c, controlled by Trenitalia UK which has strengthened its presence with the assignment of the concession to manage the line London-Glasgow. In addition, services wil be added on the new high-speed line HS​​2, which will connect London with Birmingham and Manchester.

In Germany and the Czech Republic the Italian FS is present with Netinera, which was formerly Arriva Germany. In Greece, where faster connections between Athens and Thessaloniki have been activated and in Spain, where the Frecciarossa 1000 will travel between the main cities of the country by the end of 2022.

FS Italiane wants to become more autonomous on their energy use and increase the share of renewable energy to 40 percent.  In the Urban branch, the main strategic priority will be to manage and regenerate the Group’s real estate assets, with an investment of 1.5 billion euros concentrated in around 24 million square meters of land adjacent to roads and railways, which could be used to produce clean energy, create green corridors and cycle paths.

It also includes the transformation of stations and effective interchange between trains and other modes of transport. The parent company of the Urban branch will be Sistemi Urbani, and also includes the companies Metropark, RFI and Anas for the real estate part, and Gs Immobiliare.

Yes, but quality pays! (Just “state of the art” and quantity, no longer is sufficient. Even worse, too well documented, costly and no longer timely any billion into current standard is a very expensive, a devastating, nail in coffin for railways.)
Other devices decisively add capacity for lower costs. So now railways simply need to! At cargo transports, in Italy, nearness to port, sustainably, has to be taken advantage of,, by a New Old Railway, designed for an 50% added capacity, etc.!