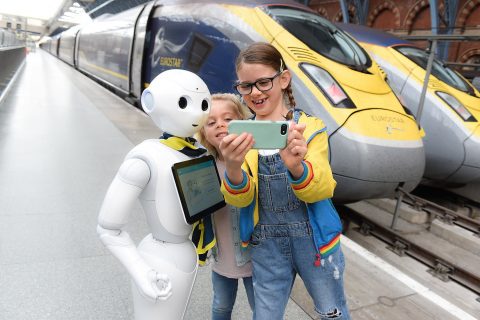 The spread of coronavirus around the world and particularly in Europe has made the use of unmanned technologies more vital. In this regard, robots could be a solution for cleaning and disinfecting trains or stations. Where else in the rail sector they may be applied?

Among the latest developments are the use of robots to fight coronavirus. The MTR Corporation, the operator of railway and metro systems in Hong Kong, the United Kingdom, Sweden, Australia and the Mainland China, has introduced a new automated “Vapourised Hydrogen Peroxide Robot” (VHP Robot) for cleaning and disinfecting the trains and stations of the Mass Transit Railway, the public transport network in Hong Kong which is consisted of railway, tram and bus services. “We hope this helps to ensure the comfort of passengers’ journeys by providing ever greater health protection for our colleagues and our customers alike,” said Dr Tony Lee, Operations Director at MTR.

At the moment, the MTR Corporation is using only one robot for cleaning Mong Kok East Station, including staff changing rooms, staff toilets, mess room, the passenger lifts. The company plans to deploy 20 VHP robots for cleaning trains in depots. The VHP Robot was jointly developed by MTR and Avalon Biomedical, a Hong Kong biotechnology company.

It is able to automatically spray hydrogen peroxide solution. As a result, the agent can penetrate the small gaps that are difficult to reach during normal cleaning work. The VHP Robot can eliminate viruses and bacteria, including staphylococcus aureus, Escherichia coli and so on. It needs about four hours to clean an eight-carriage train. The robot is operated remotely with the help of a mobile device within a distance of 20 metres.

Several airports in the world, including Schiphol in the Netherlands, have already tested robots that assist passengers in navigating around the terminals. The railway companies also try to keep up with the trend. At the end of 2015, French railway operator SNCF has deployed several android robots at the train stations. They were named Pepper and were developed by SoftBank Robotics, the French subsidiary of the Japanese technology company SoftBank Group.

Each android was designed to interact with humans: they are able to recognise the basic human emotions due to special perception modules, to talk and even to gesture owing to touch sensors, LEDs, microphones and so on. The set of infrared sensors, bumpers, an inertial unit, 2D and 3D cameras, sonars provide the robots with the opportunity for omnidirectional and autonomous navigation. In 2018 the Pepper androids were deployed at the London St Pancras station, the busiest one in the United Kingdom, for informing the passengers of Eurostar trains.

Another area for using robots in the rail sector is the manufacture of rolling stock. To this end, several companies have already installed welding robots to facilitate and improve the producing process. Such kinds of robots are not androids, they look like automated machines. In 2019 two manufacturers deploy the welding robots at their plants. The Alstom’s production facility in Le Creusot, France, was equipped with a special robot developed by the French company Farman for automatic welding of steel or stainless steel parts and handles bulky parts with a maximum weight up to a tonne and a maximum length up to five metres. Alstom is using this solution in producing the parts of the new-generation RER and TGV high-speed trains.

In addition, Ural Locomotives, a Russia-based joint venture of Siemens Mobility and Sinara Group, has increased the number of welding robots deployed in the manufacturing process. At the end of the last year, the plant has received the fourth welding robot. It is applied to weld bearing housings for 2ES6 electric locomotives. Three other welding robots are being utilised for manufacturing the bogies for the Lastochka electric trains. All the robots were supplied to Ural Locomotives by IGM Robotersysteme, the Austrian producer of welding automated solutions for various industries. 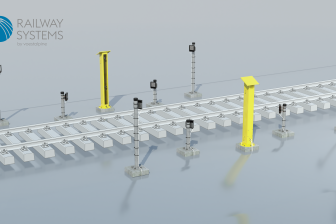 Thank you, Istvan, for the information