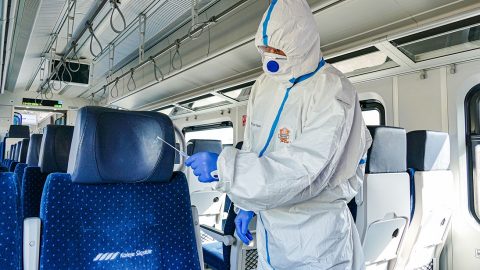 Published on 23-03-2020 at 11:10
Disinfecting trains with titanium dioxide in Poland, source: Koleje Śląskie

Polish regional railway operator Koleje Śląskie is testing an innovative method in cleaning and disinfecting its trains. To this end, the company has started to use titanium dioxide that is regarded to be more effective in neutralising bacteria. This method is widely used for disinfecting hospitals and food production plants.

To provide the tests of a new solution, Koleje Śląskie has chosen the TitanSolid product made by Polish company Lumichem. The agent is the latest product of nanotechnology and integrates with the coated surface at the molecular level. It effectively eliminates pathogenic microorganisms – bacteria, fungi, viruses and their spores, building a shield that remains active for a minimum of one year from the first application.

The new step supports traditional methods of vehicle disinfection. “Our priority is to achieve the highest efficiency in maintaining train cleanliness and guaranteeing maximum microbiological safety to all travellers,” Koleje Śląskie stated. The Polish railway operator plans to try titanium dioxide for several days. Afterwards, it will unveil the results of the tests for all parties concerned.

It is worth to note that this technology is being used for disinfecting hospitals and food production plants. Titanium dioxide has also been approved for use in the European Union. According to studies carried out in other areas, it reduces significantly, by over 90 per cent, the number of microorganisms on usable surfaces as well as eliminates volatile organic compounds, fungi, including mould, neutralizes endotoxins and harmful compounds such as nitrogen oxides, sulfur dioxide, benzene or formaldehyde. The use of technology does not harm the safety of passengers.

Koleje Śląskie (‘Silesian Railways’ in Polish) was incorporated in 2010. It is wholly-owned by Silesian Voivodeship. Therefore, the main focus of Koleje Śląskie is to provide train service in this region. The company’s network includes 15 lines. Some of them also cover the neighbouring regions: Opole Voivodeship and Lesser Poland Voivodeship.

Koleje Śląskie also has one cross-border connection that runs from Katowice, the main city of Silesian Voivodeship, to the Czech town of Bohumin. This connection was suspended due to the border closure caused by the coronavirus outbreak. Koleje Śląskie is the sixth-largest railway operator in Poland in terms of passenger traffic. Last year the company carried over 20 million passengers. The company operates a train fleet of over 60 units. 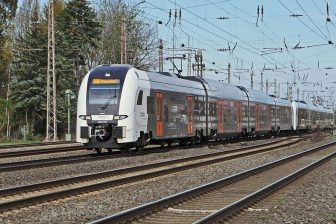