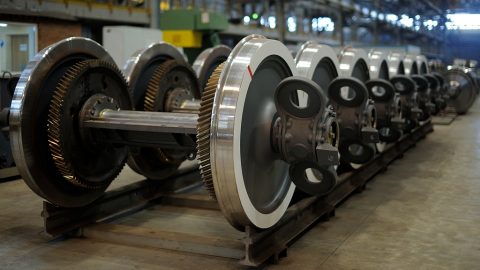 Laser technology has been introduced in the production of new trains and locomotives in Russia. With its help, Ural Locomotives is inspecting the geometric parameters of the wheelset axles. The new equipment increased workforce productivity by 10 times at the company’s manufacturing facility.

Ural Locomotives, a joint venture of Siemens and Sinara Group, is focused on the production of the high-power electric locomotives and the Lastochka passenger trains. The unique automated complex with a laser technology monitors the quality of the wheelset axles directly during the manufacturing process. Due to the innovation, the control time per one axle has been reduced to 10-12 minutes from 1.5 – 2 hours needed for the same work to be done manually. The new equipment is able to work around the clock and perform the control measurements of 80 axes per day.

“The new complex operates on the basis of laser measurements without the use of contact controls and checks the wheelset axles both outside and inside in terms of compliance with geometric parameters. Modern equipment will increase the level of automation of the production process and labour productivity on the site by 10 times,” said Oleg Spai, CEO of Ural Locomotives. According to him, the new automated complex was installed at the end of 2019 within the company’s investment programme.

The stationary automated complex functions in accordance with a predetermined algorithm. At the same time, a specially trained worker monitors its work. If the device detects deviations from the size, it has a video camera that allows a worker to evaluate the nature of the defect and decide on the suitability of the axles for operation. The measurement results obtained from the sensors are sent to a personal computer, where they are mathematically processed and analysed in accordance with regulatory documentation. After that, the results are saved in electronic forms.

“Another important feature of the new device is the ability to generate, record and store the control results in electronic form,” added Oleg Spai. The electronic protocols are added to the company’s monitoring system of the rolling stock quality called ‘UL-Service’ and are included in the electronic passport of every electric train produced by Ural Locomotives. Moreover, the manufacturing company intends to use this data for predictive maintenance and planning the repair of the wheelset axles.